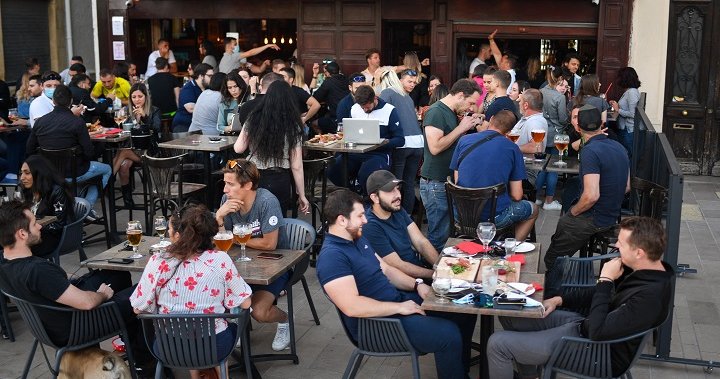 TORONTO — The FIFA World Cup is bringing a welcome surge in traffic to restaurants and bars.

Rocco Mastrangelo Jr., a co-owner of Cafe Diplomatico in the heart of Toronto’s Little Italy neighbourhood, said the restaurant kicked into high gear for the World Cup despite the cold, setting up tents in the road next to its covered, heated patio and hiring live music for Canada’s first game.

Though the Wednesday game didn’t end with a win, Mastrangelo Jr. is still excited for the World Cup matches to come, saying he expects traffic to pick up for certain games.

Cafe Diplomatico is already fully booked for Sunday’s matchup of Canada and Croatia, he said.

On Wednesday, fans packed the Glebe Central Pub in Ottawa, even standing shoulder-to-shoulder on the patio in the cold, said general manager Dave Hania, and they stayed into the evening once the game was over.

“It was a really good game,” he said.

Hania said holiday bookings are already picking up, and it feels like “business as usual” compared to the past pandemic holiday seasons, so the World Cup has him extra busy.

Because of the time difference, the World Cup games are all earlier in the day, which means the pub is getting a double whammy of daytime and evening traffic on game days, said Hania.

Balraj Jutla, co-owner of Lost Craft Brewery and High Park Brewery, agreed the morning timing of the games is an “added benefit.”

He expects Sunday, which is fully booked, to be “incredible” for fans and restaurateurs alike, based on Canada’s exciting performance Wednesday.

It’s a welcome extra boost after the past two years, Hania said, noting that it’s not just Canada’s games people are flocking to bars to watch _ he’s expecting a lot of traffic when England plays, too.

On Sunday morning, “We’re going to be packed,” said Hania.

Cafe Diplomatico will have another street-party setup for the final game of the 2022 World Cup on Dec. 18.

Game-day traffic for this World Cup might not hit the same levels it would with nicer weather, but it’s going to bring a nice boost, said Mastrangelo Jr., as the chilly weather sets in and the holiday season approaches.

“It does definitely give us a boost to sales when … we probably would be a little bit slower.”

Payment provider Moneris said it predicts the World Cup will kick off a surge in spending for bars and restaurants.

In 2018, the last World Cup, bars in Toronto’s Little Portugal and Little Italy saw spending volume rise by more than 15 per cent, while volumes rose just under 10 per cent citywide, said Moneris — and that year Canada didn’t even qualify.

And it’s not only soccer. The Toronto Blue Jays’ wild-card series this year brought sales up by more than 50 per cent for Toronto bars and restaurants near the stadium.

Similar events like the Canadian Grand Prix and hockey’s Battle of Alberta playoff series brought a rush of spending into local bars and restaurants, Moneris said.