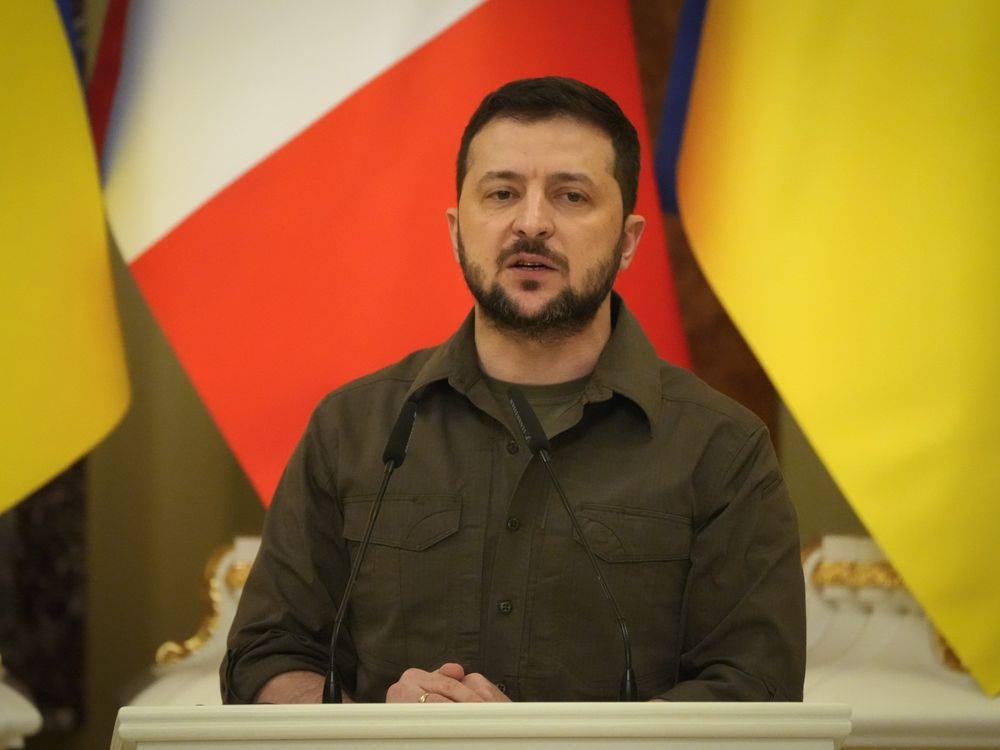 OTTAWA — Ukrainian President Volodymyr Zelenskyy has called on Canada to help spearhead a long-term peace plan with Russia, as the nearly 10-month war in Ukraine enters a critical phase with the approach of winter.

The Ukrainian leader threw down the gauntlet in a pre-recorded video address to the Halifax International Security Forum, where senior government and military officials from Canada and around the world are gathering this weekend.

Zelenskyy, whose country was invaded by Russia in February, told participants that real and enduring peace between Kyiv and Moscow will require agreement on 10 different areas.

Those include the withdrawal of Russian forces, the release of prisoners, the securing of Ukraine’s nuclear, food and energy security, the restoration of his country’s territorial integrity and a tribunal to hold those responsible to account.

The Ukrainian president went on to encourage countries to “choose which item you can help with,” adding: “I believe that Canada, which strongly supports us, will also choose one of the peace formula items for itself and will show all strands of leadership.”

Among those participating in the forum was Defence Minister Anita Anand, who in her own address told those in attendance that Ukraine’s military is winning the war and Russian President Vladimir Putin had only united NATO and renewed its purpose.

“The spirit and determination of the Ukrainian people and President Zelenskyy continue to inspire us all. Ukraine’s armed forces are driven, disciplined and better-trained — and they are winning,” Anand said.

Russia is facing mounting setbacks after nearly nine months of fighting, and recently pulled troops out of the key city of Kherson in southern Ukraine. But Russia’s attacks on Ukraine’s energy and power facilities have fueled fears of what winter will bring.

Ukraine’s electricity grid chief warned of hours-long power outages Friday as Russia zeroed in on its energy infrastructure with heavy artillery and missile attacks that have interrupted supplies to as much as 40 per cent of the country’s people.

“You always need to prepare for the worst. We understand that the enemy wants to destroy our power system in general, to cause long outages,” Ukrenergo’s chief executive Volodymyr Kudrytskyi told Ukrainian state television.

“We need to prepare for possible long outages, but at the moment we are introducing schedules that are planned and will do everything to ensure that the outages are not very long.”

Kyiv is already facing a “huge deficit in electricity,” said the city’s mayor, Vitali Klitschko. Some 1.5 to two million people — about half of the city’s population — are periodically plunged into darkness as authorities switch electricity from one district to another.

“It’s a critical situation,” he said.

Meanwhile, Ukrainian and international investigators were forging ahead on uncovering suspected war crimes committed by Russian forces during the Kharkiv region’s near seven-month occupation.

Ukraine’s National Police said Friday that its officers had initiated over 3,000 criminal proceedings against Russian troops.

Reports of torture and other atrocities committed by Russian troops have also emerged from the southern Kherson region, where Ukrainian officials said they have opened more than 430 war crimes cases and are investigating four alleged torture sites.

— With files from The Associated Press.