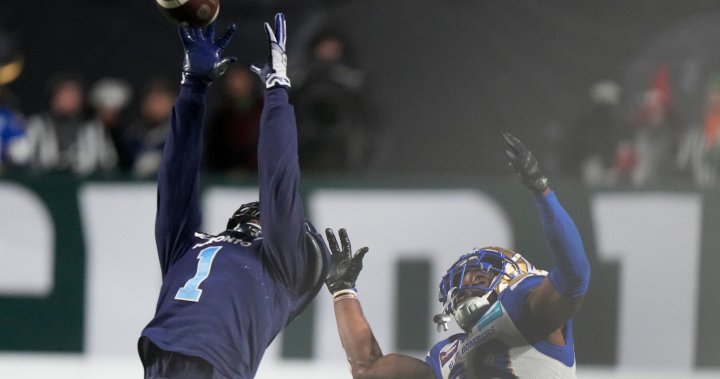 A.J. Ouellette’s five-yard touchdown run in the fourth quarter rallied the Toronto Argonauts to a stirring 24-23 upset of the Winnipeg Blue Bombers in the 109th Grey Cup on Sunday night.

Ouellette’s TD – his second of the game – came at 11:36 with Boris Bede’s convert giving Toronto its slender advantage.

And it was backup Chad Kelly, the nephew of former NFL star Jim Kelly, who engineered the five-play, 36-yard drive with veteran McLeod Bethel-Thompson sidelined with an unspecified injury. Ouellette’s touchdown was set up by Javon Leake’s 44-yard punt return that put Toronto at the Winnipeg 31-yard line with 6:07 remaining.

On Winnipeg’s next possession, linebacker Henoc Muamba intercepted Zach Collaros to put the Argos at the Winnipeg 43-yard line with 3:20 to play. But the Bombers stayed alive with Nick Hallett’s block of Bede’s 37-yard field goal that put the West Division team at its 29-yard line with two minutes to go.

Following Robbie Smith’s second-down sack, Smith got to Collaros again on third down but was flagged for a facemask penalty, putting Winnipeg at its 41. The Bombers drove to the Toronto 40-yard line but Smith blocked Liegghio’s 47-yard attempt, putting Toronto at its 14-yard line with 43 seconds remaining.

Toronto was then able to run the clock out.

The loss tarnished a record-setting effort by Winnipeg’s Janarion Grant, who had a 102-yard punt return TD earlier in the fourth.

Toronto earned its first Grey Cup since 2017 and extended its win streak in the big game to seven straight.

The two teams squared off in the first Grey Cup game at the new Mosaic Stadium. The last time the contest was there was 2013 when the game was played in Mosaic Stadium at Taylor Field and the hometown Roughriders dispatched Hamilton 45-23 for the franchise’s fourth and last championship.

The contest was played before an announced sellout of over 33,000 spectators although there were noticeable patches of empty seats throughout the venue.

The temperature at kickoff was -2C (felt like -7C) with winds of 23 kilometres an hour. It dropped to -4C (felt like -11C) and the wind increased to 28 km-h to open the second half.

Collaros finished 14-of-23 passing for 183 yards with an interception.

1:43Esports tournament brings gamers from across Canada to the Grey Cup

Andrew Harris, who helped Winnipeg win titles in 2019 and ’21, ran for 55 yards on 10 carries for the Argos. Ouellette had 24 yards rushing on six carries.

Bede made just three of his six field goals on the night. He also added two converts and single.

Liegghio’s 45-yard field goal at 14:39 of the second gave Winnipeg its 10-7 halftime advantage. Bede had a chance to tie the score but his 53-yard attempt on the final play was wide.

The second was a better one for Winnipeg (148 net offensive yards compared to 119 for Toronto). However, the Bombers had the lead because its defence forced the Argos to settle for field goals and Bede could only convert two of his four first-half attempts.

After struggling in the first, Collaros was 6-of-10 passing for 95 yards at the half. Twice, though, he had Dalton Schoen open but the two couldn’t successfully hook up.

More importantly, Collaros sprung right up following a seven-yard run in the second, appearing to show no ill-effects of the foot injury he suffered in last weekend’s West Division final.

Toronto appeared determined to establish the pass as Bethel-Thompson completed 10-of-21 attempts for 142 yards. Harris ran five times for 36 yards.


Toronto went ahead 4-0 when Bede’s missed 36-yard boot went for a single at 2:56 of the second. Winnipeg’s offence finally put something together as Prukop’s one-yard TD run on third down at 7:09 capped an eight-play, 70-yard march that took 4:35.

Bede opened the scoring with a 46-yard field goal at 4:44 of the first, which was controlled by Toronto. The Argos had the ball for 8:55 and outgained Winnipeg 71-29 in offensive yards while Collaros was just 1-of-4 passing for four yards.

However, defensive lineman Jackson Jeffcoat had his team’s biggest play of the quarter, recovering a fumble after sacking Bethel-Thompson.