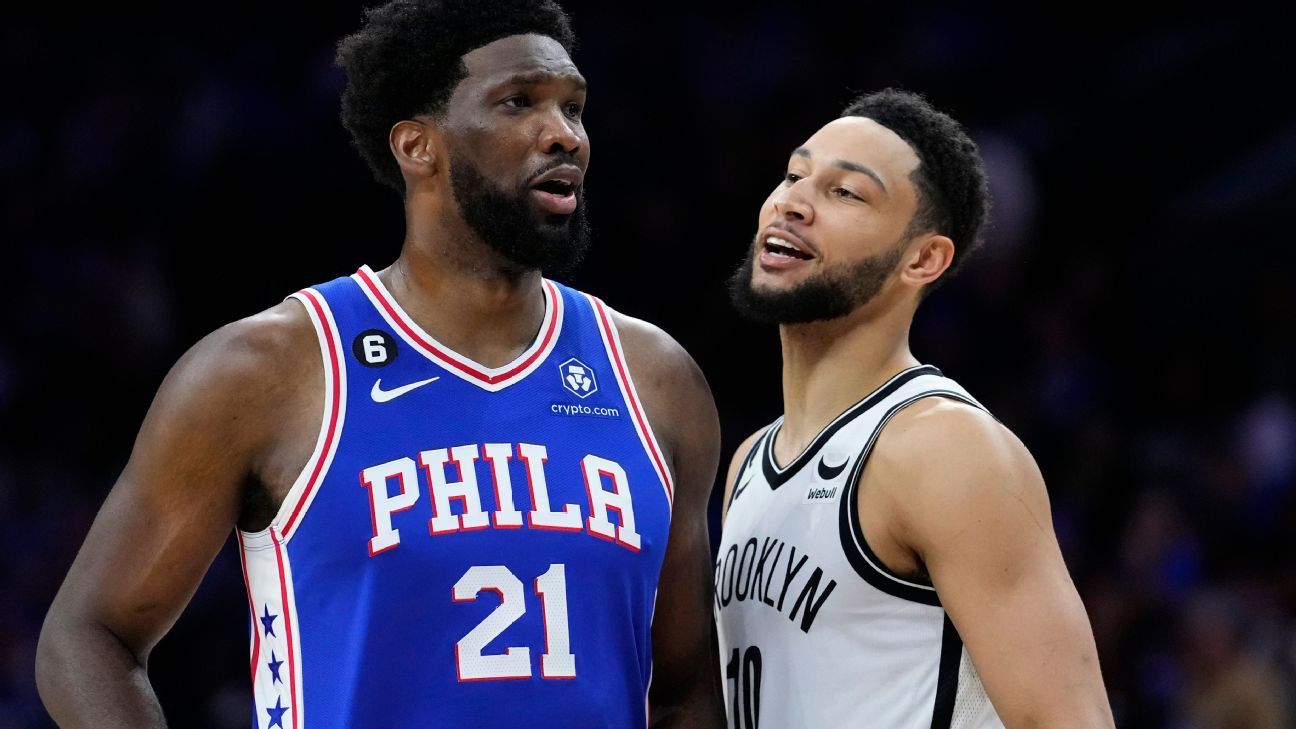 PHILADELPHIA — The fans here in the City of Brotherly Love waited almost a year to see Ben Simmons and Joel Embiid face each other as opponents for the first time in an NBA game.

In front of a raucous sellout crowd here at Wells Fargo Center, it was the hometown 76ers that came away with a thrilling 137-133 victory over the Brooklyn Nets — though the score was a mere backdrop to the ongoing drama surrounding Simmons and Embiid finally facing one another.

“Nothing,” Joel Embiid said, when asked about how it felt going up against Simmons for the first time. “Just, like every single night, [I am trying to] just fricking kill whoever is in front of me. My mentality is always about scoring. If I get doubled, make the right pass, but if I get played 1-on-1, or I see an opportunity to go score, I’m gonna go score.”

Few in attendance would agree with Embiid’s assessment. Just a minute into the game, he aggressively posted Simmons up — the first of three post-ups he would attempt to execute on his former teammate.

And while none of them turned into a basket — he missed a shot, got stripped and was fouled, respectively — it set the tone for how the night would play out, with the crowd going wild for each of them.

“The first play, Ben is guarding Joel and it was like it was a party,” 76ers coach Doc Rivers said later with a laugh. “It was hilarious. That’s when I turned to our coaches and said, ‘This is a boxing crowd tonight. They want to see them drop the basketball, turn and duke it out.’

“And [Simmons and Embiid] went at each other, which is fun and good.”

It had been 583 days since the two former co-stars had been on this — or any — court together. That day — Game 7 of the Eastern Conference semifinal series between the 76ers and the Atlanta Hawks — is infamously remembered in these parts not only because Philadelphia lost, but because of how they did — specifically for Ben Simmons passing up an open dunk in the closing minutes of the fourth quarter.

Someone without any context about Wednesday’s game would’ve been understandably been mistaken for believing it, too, was a playoff contest. Any time Simmons got the ball, a wall of noise was hurled in his direction — just as it was whenever he and Embiid were matched up against one another in any context.

But that energy extended far beyond the two former co-stars — which helped lead to a combined 45 fouls, six technicals, 63 free throws and 27 turnovers.

“It wasn’t the prettiest,” said James Harden, “but we’ll take it.”

Harden, like Embiid, tried to downplay the significance of playing against his former teammates. So, too, did Kevin Durant — who remains sidelined with an MCL sprain — on Tuesday, who said rivalries are “not really a thing” in the NBA these days.

But the actions of all involved said otherwise Wednesday, and Rivers himself admitted that he thought his team got caught up too much in all of the energy and excitement around Simmons and Embiid finally squaring off.

“I thought the team overall did,” Rivers said. “We got caught up in all the crap going on tonight. There was a lot of chippiness, and that’s good, but play above it, stay above it. Keep playing. I didn’t think we did that.”

Embiid finished with 26 points, 10 rebounds, three assists and two steals in 34 minutes for Philadelphia, while Simmons had 12 points — all in the second half — five rebounds and five assists.

Simmons looked like a far different, and more aggressive, player in the second half, after only taking one shot attempt in the first half — a half-hearted hook shot in Embiid’s vicinity that fell short.

“He just made a choice,” said Kyrie Irving, who had game-highs of 30 points and 10 assists. “He just made a choice to put his head down, be aggressive for our team and we need him to do that. Just came to the bench and encouraging him as we do every single day so when he’s aggressive like that being Ben Simmons then we look very, very good and it gives us opportunities that sometimes we don’t get if he’s not. So, we’re just going to keep supporting him and just him to continue to do that.”

But while Simmons was more aggressive in the second half, he found himself rooted to the bench for the final 8 minutes 57 seconds of game action — a stretch that, after he checked out with Brooklyn trailing by 14, saw the Nets immediately rip off an 18-4 run to tie the game, and turn it the final few minutes into a roller coaster ride for the hometown fans. Nets coach Jacque Vaughn said Simmons was kept on the bench to give Brooklyn more shooting and spacing on the court.

The game was only — finally — decided when De’Anthony Melton, again starting in place of Tyrese Maxey, sunk a pair of free throws with 12.4 seconds to go, and Embiid stole the ensuing inbounds pass to seal the victory – a sixth in a row for Philadelphia, and that kept the 76ers in sole possession of second place in the Eastern Conference ahead of the Milwaukee Bucks.

The Nets, meanwhile, are now 2-5 since Durant exited the lineup with his injury heading into Friday’s game back at home against the Pistons.

But, after so much hype and buildup for Simmons and Embiid to finally share the court together, Rivers said he was just glad his team could put this moment in time in the past and move on.

“Now,” he said with a smile, “we can get back to regularly scheduled programming.”