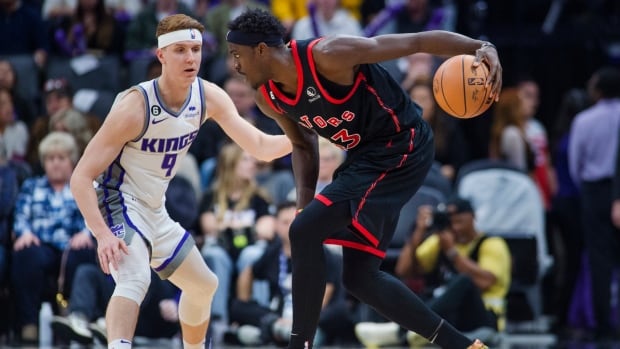 Pascal Siakam had 26 points and 11 rebounds as the Toronto Raptors beat the Pacific Division-leading Sacramento Kings 113-95 on Wednesday night.

“I like him shooting all those perimeter shots,” Raptors coach Nick Nurse said of Siakam. “He just got back in command of the game.”

Fred VanVleet scored 17 points and O.G. Anunoby added 11 for the Raptors, who had lost four of their last six games entering the contest. Precious Achiuwa added 19 points and Chris Boucher came off the bench to score 16.

“We looked good and felt good,” VanFleet said. “We were locked in. We have had our struggles this year.”

The Kings Domantas Sabonis finished with nine points and eight rebounds and saw his 22-game double-double streak come to an end.

“I have to play better,” said Sacramento’s Malik Monk, who shot two-for-seven overall. “That’s it … shot’s just not going in. They’re going to start falling.”

The Raptors led by a point after the first quarter and seized control by outscoring Sacramento 34-27 and 26-17 in the second and third periods, respectively. The Kings closed within 12 points in the fourth quarter before Toronto pulled away.

“They kicked our behind on the glass,” Kings coach Mike Brown said. “It’s hard to beat a team when a team gets 25 more shots than you do.”

Anunoby returned to the starting lineup after being sidelined with an ankle injury.

The Raptors travel to face the Golden State Warriors on Friday.