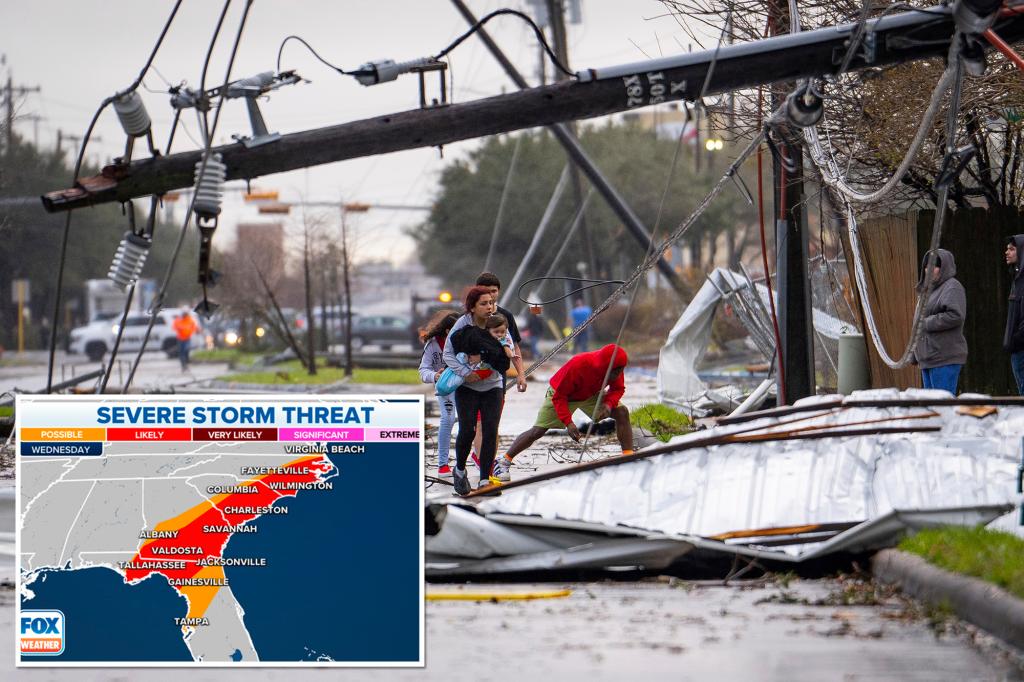 The same line of powerful severe storms that battered the Houston area in southeastern Texas is pushing its way across the Southeast and is expected to impact areas from northern Florida to eastern North Carolina.

A tornado watch has been issued for the central and eastern Florida Panhandle and extreme southwestern Georgia until 11 a.m. ET.

The Fox Forecast Center said the threat of severe storms will continue Wednesday morning from the Florida Panhandle to southern Georgia. Strong wind shear — the changing of wind speed and/or direction with height — will continue the tornado threat in these areas. The shear will begin to relax Wednesday afternoon, which should allow the tornado threat to decrease as the line of storms moves east across the Southeast.

“Those of you in places like Albany, Georgia, Savannah, Georgia, Hilton Head and even Charleston, South Carolina, all need to be on alert today, and also those of you in Wilmington, North Carolina, … as this line moves through, those quick, spin-up tornadoes are possible,” Fox Weather meteorologist Jason Frazer said.

Damaging wind gusts will be the main threat for cities in Florida like Jacksonville, Gainesville, Tampa and Orlando, as well as Savannah in Georgia.

“For those of you in other areas, even if you don’t see tornadoes, you’re likely to end up seeing the winds really pick up. Because of the intensity with some of these rain showers, visibility will also be an issue,” Frazer said.

Farther north across the eastern Carolinas, storms will intensify through the day as moist, unstable air streams northward off the Atlantic on Wednesday afternoon.

The threat of damaging wind gusts and tornadoes will be the greatest closer to the coast from Charleston in South Carolina to Virginia Beach in Virginia. The threat of severe storms will end after about 10 p.m. ET as the line of storms moves off the coast and into the Atlantic.

The same line of severe weather spawned at least 14 reports of tornadoes across southeastern Texas and southwestern Louisiana on Tuesday afternoon, causing damage and injuries. Luckily, no deaths have been reported.

Survey teams with the National Weather Service in Houston have confirmed at least EF-2 damage so far in the Pasadena and Deer Park areas southeast of Houston, the agency said Wednesday morning. Teams will continue to provide additional updates as their meteorologists continue to conduct surveys.

Officials are calling the aftermath 15 miles outside of Houston in Pasadena, Texas, nothing short of catastrophic as the true scope of the damage is revealed. Homes and buildings have been torn apart, as cars and trucks were tossed aside as if there were toys.

However, the Houston area was not spared by the storms that triggered dozens of tornado warnings, including a rare tornado emergency — a first for the area and among the National Weather Service’s most dire warnings.

Pasadena and Deer Park were some of the hardest-hit areas after a tornado tore through suburbs on the southeastern side of the Houston metro area.

Workers at a daycare in Deer Park told Fox 26 Houston they had to move the children there to safety as the twister hit.

“They were scared,” one worker said. “Everybody was kind of into a panic ’cause we went fast and tried to get everybody in fast, and so they were a little scared, but we talked to them, put on Cocomelon, calmed them down, and after that, everybody was pretty much OK.”

For Ryan Lee, a senior captain at the Houston Fire Department, it was definitely a different experience.

“Just from my 20 years in the Houston Fire Department, even in my decade in the Rescue division, we’d go to building collapses and stuff like that, but this was a different experience,” he said. “It was just widespread damage — it was impressive, the level of damage.”

As of Wednesday morning, nearly 50,000 power outages spread across Texas and Louisiana, about half as much as was reported during the height of the storms.