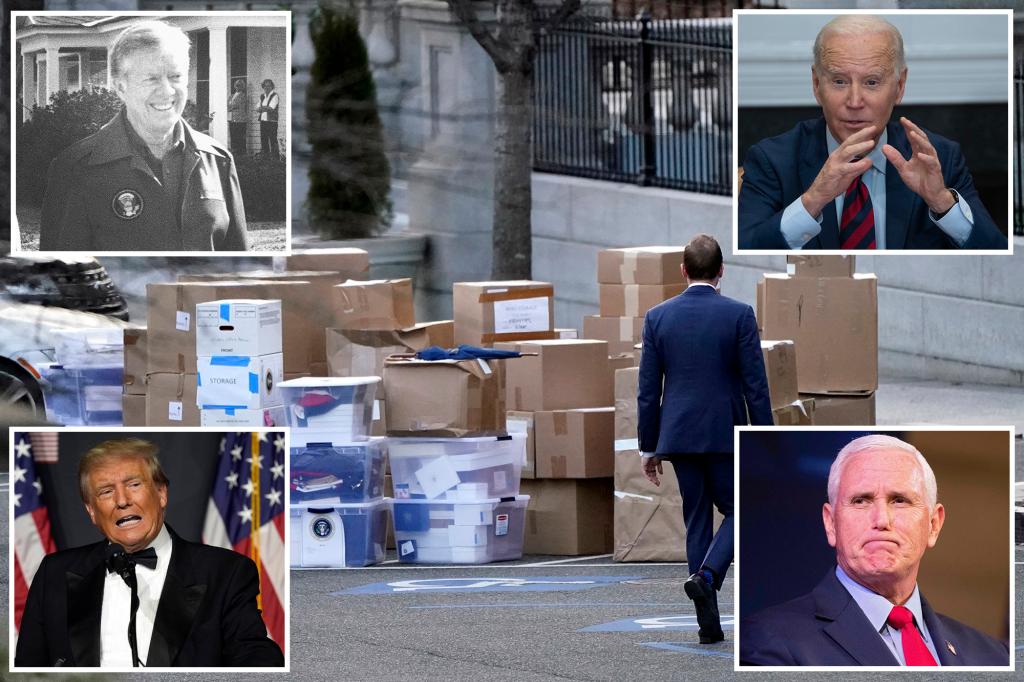 ​The issue of elected officials mishandling sensitive documents, which has ensnared both President Biden and his predecessor, Donald Trump, is one that dates back decades to Jimmy Carter’s presidency. ​

Former Vice President Mike Pence became the latest high-ranking official to cop to keeping classified records when he confirmed on Tuesday that materials marked secret were found at his Indiana home. ​

Concerns about the botched treatment of such materials have been in the headlines for months after the FBI retrieved documents from former President Donald Trump’s Mar-a-Lago resort in Florida last August.

Beginning Nov. 2, classified records were found at Biden’s home in Wilmington, Del. and at the Penn Biden Center in Washington. ​​

But they were not the first presidents to come face-to-face with the matter.

Former President Jimmy Carter found classified docs at his Plains, Ga., home on at least one occasion and returned them to the National Archives and Records Administration, which preserves presidential papers, the Associated Press reported on Wednesday.

It was unclear when the items were found.

An aide at the Carter Center did not provide additional details about the discovery at Carter’s home.

A representative for former President Barack Obama told The Post that all the classified documents from his administration were submitted to the National Archives after he left office and the agency continues to retain custody of them. The spokesperson did not say whether Obama’s files had been double-checked for any sensitive info in the wake of the controversies involving Trump, Biden and Pence.

Spokespeople for other past presidents — the late George H.W. Bush, Bill Clinton and George W. Bush — confirmed that their records had also been turned over to the National Archives as required by law, CNN reported.

Former officials serving at all levels of government come into possession of classified materials and hand them over to federal authorities several times a year, a person familiar with the matter told the AP.

While there are precise processes for how to review and store records, those policies are sometimes skipped ​by national security officials, secretaries and military aides​ ​out of convenience, expediency, or even carelessness. ​

There’s a difference in how the intelligence community deals with mishandling such documents, where penalties can include termination, revocation of security clearances or prosecution.

​“Executives go back and forth to their house with documents and read them. They read them at night, they bring them back,” Sen. Tim Kaine​ (D-Va.) told the AP, noting that top Senate aides are required to keep classified materials in secure rooms at the Capitol.

“I can see how this happens,” ​Kaine said. “But again, every situation is different. They are all very serious. So, how many? How serious? How did you get them? Who had access to them? Are you being cooperative? And the same set of questions has to be answered with respect to Pence and with President Biden and President Trump.”

Keep up with today’s most important news

Stay up on the very latest with Evening Update.

Federal laws ​govern the handling, retention and distribution of classified documents, but they are rarely enforced. ​Hillary Clinton was investigated for keeping classified documents on her private email server when she was secretary of state in the Obama administration – a practice that became one of the main issues of the 2016 presidential race. ​​

While federal law prohibits the storing of classified documents in unauthorized locations, it can only be prosecuted when the person is found to have “knowingly” removed the files from a proper place.