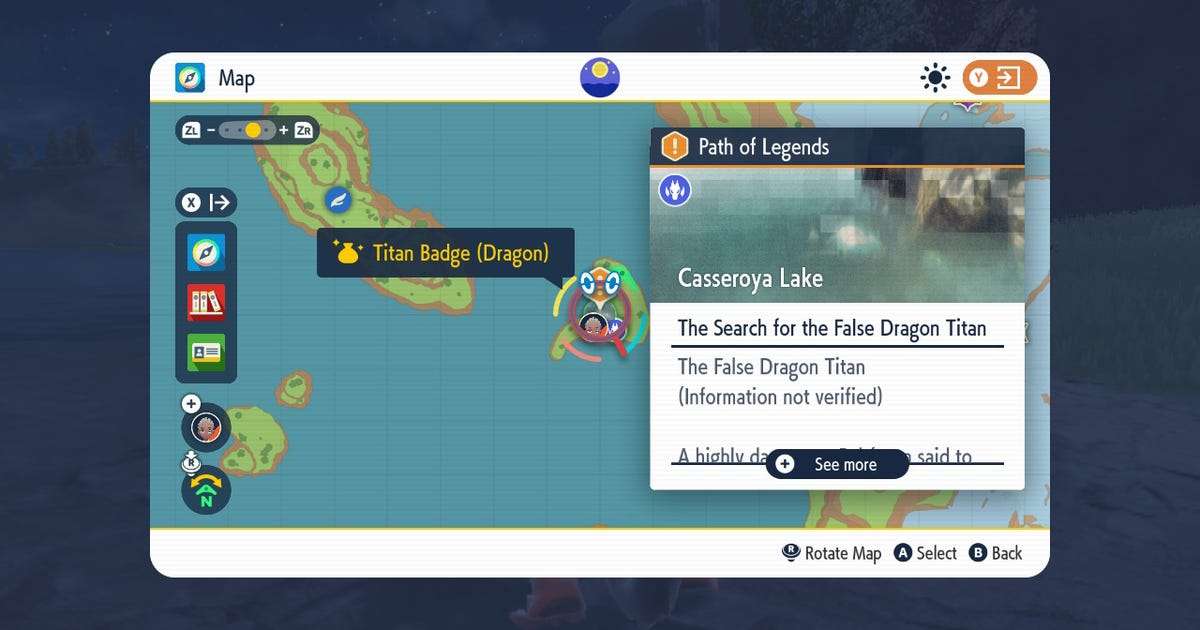 This is a short guide, but it may save you a lot of time. If you’re playing Pokemon Scarlet or Violet, you know that one of your three main quests in the game is to find and defeat five Titan Pokemon. The final one most people will encounter — since they’re open-world games, you can technically find the Titan Pokemon in any order — is the False Dragon Titan.

It took me an embarrasing amount of time to find the False Dragon Titan.

At the beginning of the game, the location for all four Titan Pokemon is put on your map. The preceding four Titan Pokemon are where the maps says they’ll be, but the False Dragon Titan is a little more complicated. When you the little island in Casseroya Lake where the map says the False Dragon Titan is, you’ll find a trainer to battle, a bunch of Tatsugiri Pokemon and not much else.

Well, one of those Tatsugiri is not like the others. If you go to the northeast edge of the island, you’ll see a Tatsugiri that’s slightly larger than the others. When you move close to it, it’ll emit a “Titaaan!” speech bubble. Once you interact with it, a giant Dondozo will surface behind the Tatsugiri, initiating a battle.

Once you beat it, it’ll swim off to the shore at the center of the island in the middle of Casseroya Lake. Like the Titan Pokemon before it, the Dondozo will smash a hole in the wall, eat a Herba Mystica and battle you once more, though this time you’ll have Arden’s help. After you defeat it, you’ll have to battle Tatsugiri as well.

“Maybe the Titan was both those Pokemon together?” Arven reasons, “like some kind of combo meal.”

Once all that’s done, Arven will cook up and sandwich with the Herba Mystica, and your Koraidon or Miraidon will be granted a new ability. If this is your fifth Titan Pokemon defeated, your legendary will now be able to climb up walls and cliffs.