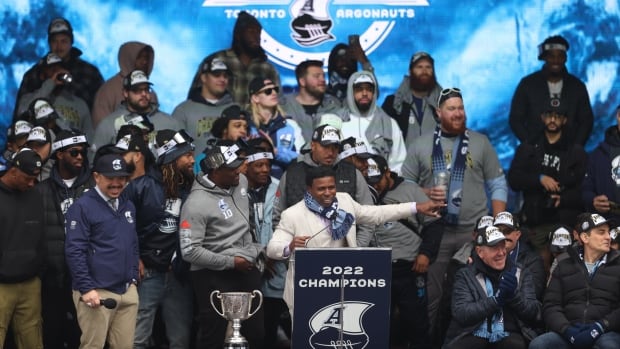 The Argos were honoured at a rally following their 24-23 Grey Cup victory over the Winnipeg Blue Bombers on Sunday in Regina.

Much like it did Sunday night, the champagne flowed freely at Maple Leaf Square, with Richardson and his teammates showering the hundreds of supporters assembled for the celebration.

Richardson, who said he had not slept since Toronto’s victory, added he and his teammates weren’t finished revelling in the franchise’s CFL-high 18th Grey Cup title, but first since 2017.

“You saw that [champagne shower Thursday],” said Richardson, who had an interception in the pivotal fourth quarter for Toronto. “We’re not done [celebrating] yet.”

But the six-foot-two, 245-pound Smith, a third-year player from Wilfrid Laurier University, blocked Marc Liegghio’s 47-yard attempt. Toronto got the ball at its 14-yard line with 43 seconds remaining and ran out the clock for stunning victory.

The Toronto Argonauts defeated the Winnipeg Blue Bombers 24-23 to win the Grey Cup for the first time since 2017, dashing the Bombers’ hopes of a three-year Grey Cup streak.

The block was Smith’s first ever in football.

“It’s awesome but at the end of the day I was just playing football,” said Smith. “I felt it hit my fingertips and when I turned around I saw the ball on the ground.

“This [celebrating Grey Cup win] is everything because I grew up in Brampton. I’ve been going to Argos games since I was a kid, I played high school games at the Argos stadium, I got to watch the 2012 and 2017 Grey Cups [both won by Toronto] so it all comes full circle.”

Toronto mayor John Tory to had to attend a city council meeting and was unable to participate in the rally. But before the celebration, the former CFL commissioner gushed about the roller-coaster nature of the fourth quarter.

“This was an extraordinary finish but I’ve been to many a game, Grey Cup game or otherwise, and I just marvel at the fact that the game can provide that excitement all the time,” Tory said. “It routinely is more exciting than the Super Bowl and I’m not putting down American football, I love all sports but this is our game.

“There are very few things left that have Canadian content, the Canadian heritage that the CFL does.”

Kelly delivered a crucial 20-yard run on second-and-15 to the Winnipeg 15-yard line that kept the drive going. He finished 4-of-6 passing for 43 yards while rushing twice for 21 yards.

“I’m just super blessed to be in this situation,” Kelly said. “I can’t even explain the amount of excitement I have to be with your teammates, your brothers, guys you’ve grinded with for 30, 40 weeks.

“You really can’t put into words how it amazing it feels to come out a winner.”

With Bethel-Thompson mulling over his football future this off-season, Toronto might need a new starter in 2023. Kelly, who is never lacking in confidence, said there’s no doubt in his mind he’s capable of being the Argos starter next season.

“One-thousand per cent,” he said when asked if he sees himself as the 2023 starter. “And I’m going to work as hard as I can to be that guy.”

Bethel-Thompson addressed the gathering remotely as he was in the U.S. spending the American Thanksgiving with his wife and young daughter.

“Football takes everything, to play elite professional football it takes the entire body, mind and soul.” Bethel-Thompson said. “Today, when I had the opportunity to go home for American Thanksgiving and be with my wife and daughter, for the first time I get to choose them. … I felt like that was the right choice.

“I miss my brothers. I’m sorry I couldn’t be there.”

Fans donning Argos jackets and hats waved flags and draped them across their shoulders as they awaited the arrival of the players in front of a giant screen. Children sitting on shoulders waved signs while the Argonauts A-Team cheerleaders threw t-shirts and team swag into the crowd.

The crowd chanted “Pinball! Pinball” as GM Michael [Pinball] Clemons took to the stage after Maple Leaf Sports and Entertainment chairman Larry Tanenbaum. And they pumped their fists and shouted “He-noc! He-noc! M-V-P! M-V-P!” when Henoc Muamba, the game’s outstanding player and top Canadian, was lauded for his contributions.

Toronto resident Amanda Luciano, a self-described “diehard Argos fan,” arrived early to get a spot near the stage.

“I started watching the Argos when I was probably about six, went to my first game in high school,” she said. “Love the team, love the guys. I don’t bleed red, I bleed double blue.”

Luciano, a 35-year-old season-ticket holder, began playing football as a child and became “hooked” to the sport when she realized the city she was born and raised in had its own football team.

“This is my team,” she said. “Just to watch them, it was an incredible season this year.”

“The Argos have been my team since I was a kid,” said Price, who attended Sunday’s Grey Cup game. “Been a season-ticket holder since 1989.

Toronto’s Levi MacPherson, 21, said he couldn’t miss honouring the team’s “historic” win of the 109th Grey Cup. MacPherson added he held the Cup in 2012 when it was at his high school.

“One of the biggest games that I went to this year would’ve had to have been the East final [34-27 win over Montreal],” he said. “… To push ourselves to win that game to get to the Grey Cup, it takes blood, sweat and tears to win a championship.

“And that is why we came out on top, beating the No. 1 team in CFL, the Winnipeg Blue Bombers.”