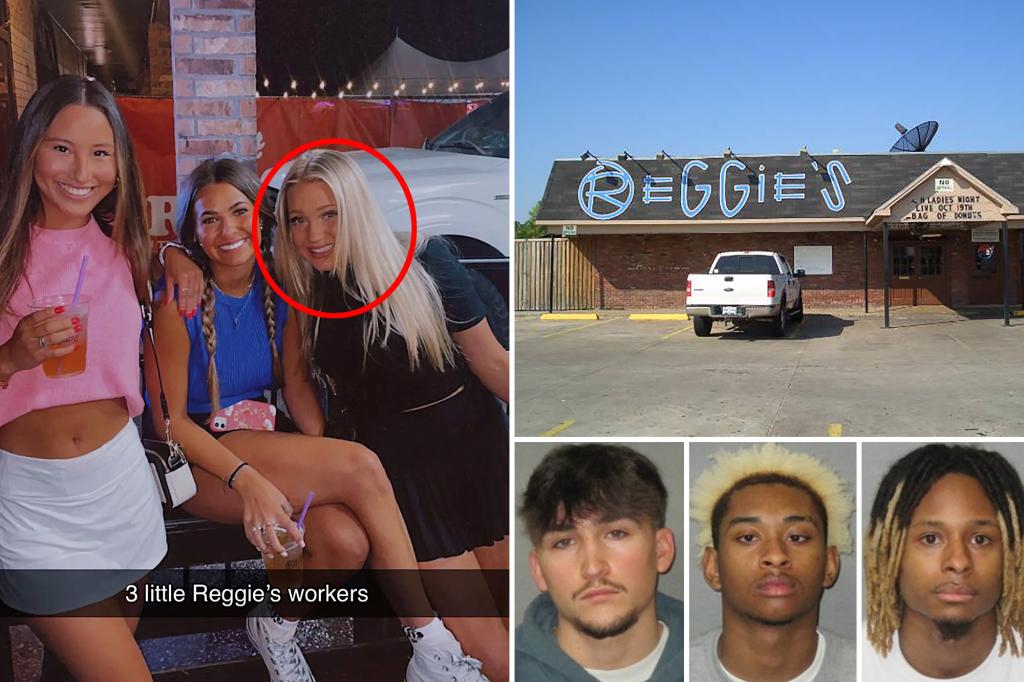 The Louisiana State University sorority member who allegedly was raped before she was fatally struck by a car reportedly worked at the bar where she and the four male suspects boozed it up in the hours before the shocking attack.

LSU sophomore Madison Brooks, 19, sometimes worked with her Alpha Phi sorority sisters behind the bar counter at Reggie’s in East Baton Rouge, where she had been drinking the evening before she died on Jan. 15, the Daily Mail reported.

Brooks posted several snaps online of herself at the bar, including one with two of her pals captioned, “3 little Reggie’s workers.”

It’s unclear if Brooks was formally employed by the drinking establishment. In Louisiana, the minimum age to bartend and sell alcohol is 18.

Meanwhile, the state Office of Alcohol and Tobacco Control on Tuesday suspended the bar’s liquor license due to “the seriousness of the allegations and the potential threat to public safety” in light of the case, The Advocate reported.

Police investigating Brooks’ death said she was captured on surveillance video entering the bar at about 10 p.m. on Jan. 14, when she apparently was not working, the Daily Mail reported.

Three other men joined the pair and got into a car, where two of them allegedly raped her before she was dumped nearby and run over by a rideshare vehicle, authorities said.

None of the suspects are students at LSU, The Advocate reported.

Carver told investigators that Brooks “was very unstable on her feet, was not able to keep her balance, and was unable to speak clearly without slurring her words,” according to the affidavit.

It was determined that her blood-alcohol content was 0.319% — nearly four times the legal limit.

The 17-year-old and Washington allegedly raped Brooks in the back seat of Carver’s car. The suspects admitted she was “in a drunken state,” but claimed she was able to give consent to having sex, police said.

The suspects dropped Brooks off at a nearby subdivision, where she was struck by another vehicle at about 3 a.m. on Burbank Drive near Pelican Lakes Parkway.

Prosecutors will seek upgraded first-degree rape charges against three of the suspects and plan to convene a grand jury in the case, WAFB reported.

District Judge Brad Myers said during bond hearings that he viewed a video filmed by one of the suspects that shows them “callously” laughing as Brooks slurred her words inside of the car, but does not show the assault.

The judge said he also reviewed footage from the bar that shows her stumbling, falling over and needing assistance to stand prior to the assault.

Reggies’ attorney Kris Perret told the newspaper that the bar is cooperating with the investigation.

Bar owner Darin Adams did not respond to a request for comment by the Daily Mail, which also reported that autopsy results revealed that Brooks had traces of THC, or cannabis, in her system at the time of her death.

Reggies has been involved in several incidents over the years, including in October 2015, when a 19-year-old man was charged with raping a drunk woman who left the bar, the Daily Mail reported.

In January 2016, LSU football player Dillon Gordon, 22, was stabbed at the drinking joint, according to the paper.

The following year, its license was reportedly suspended for 45 days after dozens of people were arrested, many for underage drinking.

And in May 2022, Carltez Tucker, 16, was shot dead outside the bar and a 24-year-old woman was injured. Three people were arrested in that incident, the Daily Mail said.

LSU President William Tate said in a statement: “Madison was a daughter, a granddaughter, a sister, a niece, a classmate, and a friend to many of you. By all accounts, she was an amazing young woman with limitless potential. She should not have been taken from us in this way. What happened to her was evil, and our legal system will parcel out justice.”

He noted that three of the suspects are underage, “yet were able to consume alcohol at a local bar.”

Some advocates on campus criticized his response.

Junior Myrissa Eisworth, the president of Feminists in Action, said Tate’s statement appeared to blame Brooks for the crime.

“By making it about alcohol, in a way, he also blames her for the situation because she was drinking and underage,” she told The Advocate. “You should never blame victims in those situations. It was really hard to read.”

Feminists in Action and LSU Democrats said in a joint statement:  “We are glad you are outraged. But we insist that you direct this energy to fix the sexual violence our community faces instead of using alcohol as a scapegoat.”