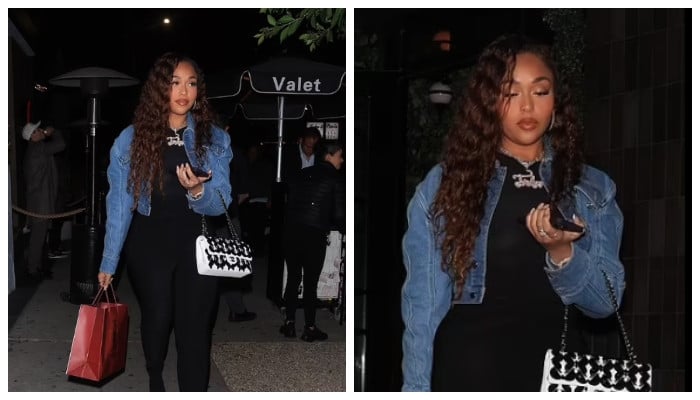 Jordyn Woods looked nothing short of a vision in her latest appearance as she enjoyed a lavish meal at Catch Steak in West Hollywood with her mother.

The TV personality and socialite, 25, showed off her impeccable style in a black skin-tight catsuit.

The model looked out of this world as she completed the stylish ensemble with a blue denim jacket and a pair of heeled boots.

Jordyn accessorised with dazzling silver jewellery, while carrying a white Chanel handbag and a shopping bag.

The former best friend of Kylie Jenner sported a bronzed makeup palette that enhanvced her natural features, teamed with a glossy nude lip.

Earlier this month, Jordyn recently shared a photo collection of herself posing in a Minnesota Timberwolves shirt in support of her beau and professional basketball player, Karl-Anthony Towns.

The couple began dating in May 2020 but officially went public with their relationship later that year in September.

The two initially had known each other and been friends for many years until their friendship turned romantic.

During an interview on Peace Of Mind With Taraji, Karl explained that Jordyn has been a huge supporter in his life after his mother’s passing. The model also experienced the loss of her own father.