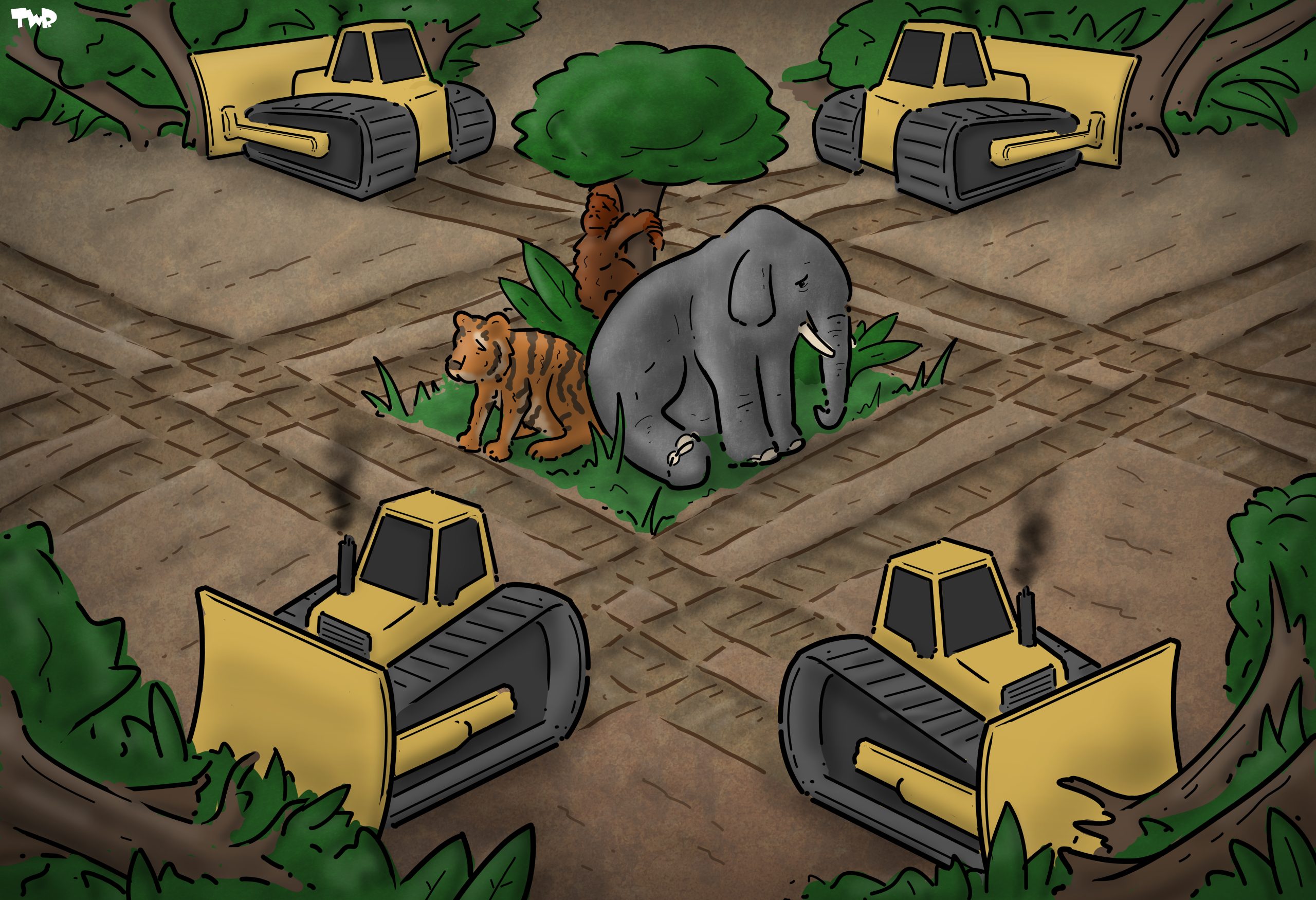 This article is reserved for our members

In previous chapters, we revealed how Michelin and the stakeholders of the Tropical Landscapes Finance Facility (TLFF) – the platform that issued the green bonds used by Michelin and its Indonesian partner Barito Pacific to finance the development of their rubber plantations (see chapters 1, 2 and 3) – concealed and then downplayed the ecological devastation caused by Royal Lestari Utama (RLU). RLU had cleared the forest just before the French company became a minority shareholder in late 2014. (Barito then held 51% of the property, which was eventually bought out in summer 2022 by Michelin.)

👉 Read chapter 1: European green finance is paying for deforestation in Indonesia: the case of Michelin

👉 Read chapter 2: How a project decried for its environmental impact became a flagship of European green finance

👉 Read chapter 3: How Michelin and its Indonesian partner sidestepped the rules for green bonds

Both the opinions of environmental experts and the documents that Voxeurop has consulted lead to the same conclusion: the land that was turned into rubber plantations before Michelin acquired its stake in RLU should have been preserved. It was part of the large forest ecosystem of Bukit Tigapuluh, or “Thirty Hills”.

The destruction of this habitat renders Michelin’s and Barito’s project non-compliant with the international standards that the two partners committed to when they used green bonds to finance it. In reality, Barito’s enterprise started long before the two actors formalised their collaboration at the end of 2014 (see Chapter 3).

Straddling the provinces of Jambi and Riau (the most deforested in Sumatra), the green expanse of Bukit Tigapuluh includes the national park of the same name, established in 1995, as well as the surrounding forests – or at least what remains of them today. At the time that Lestari Asri Jaya (LAJ), a local subsidiary of RLU, obtained its clearing permit in Jambi, these forests made up almost half of the Bukit ecosystem. As of 2010, the total forest cover was 320,000 hectares (20% of which falls within the current LAJ concession). This was already only half of the 622,000 recorded in 1985, according to a 2010 report co-authored by several NGOs, including the Indonesian branch of WWF.

Primary or secondary forests: a crucial issue of definition

Barito Pacific thus managed to deal a major blow to the primary forests of this region in an entirely legal manner – by taking advantage of the lax regulatory framework in Indonesia. According to the scientific understanding, primary forests are defined as woodland that has not been completely cleared and then regrown, regardless of whether it has been altered by human intervention in some way.

In contrast, by Indonesian law, as well as by the definition of the Food and Agriculture Organisation (FAO), primary forest is interpreted more narrowly. (1) In this view, even forests that have been slightly degraded by selective logging (harvesting of a small amount of timber – as distinct from clearcutting, where the majority of trees are felled) – fall into the category of secondary forest.

Unlike primary forests, secondary ones are not protected by the moratorium on deforestation, which was only adopted in 2011 by the then Indonesian President Bambang Susilo Yudhoyono (and extended by him and his successors since). (2)

“In Indonesia, a company can apply for a permit to selectively log a primary forest, which the government then has the option of re-labelling as secondary before granting a clearing licence, so logging companies – such as LAJ – can formally claim not to log primary forests,” Matthew Hansen told Voxeurop. A remote-sensing researcher in the Department of Geographic Sciences at the University of Maryland, he has helped develop the world’s largest database and most robust methodology on primary-forest loss. The process described by Hansen is precisely the one that Barito would have used. (3)

Prior to giving the green light to the clearing by LAJ and other similar companies, the Indonesian environment ministry only allowed selective logging in the Bukit Tigapuluh forest ecosystem. This was in the 1990s, when much of the local forest was still classified as primary. The largest selective logging company active in the area was Asian Forest Industries (IFA), also owned by the Barito Pacific group, as discovered by Voxeurop. Barito Pacific owned IFA through its subsidiary in the name of Barito Pacific Lumber, as evidenced by a notarial deed from 2020 unearthed by Voxeurop.

Once it expired at the turn of the century, its concession of about 300,000 hectares was gradually split into multiple concessions for intensive exploitation (allowing the conversion of forests into agricultural production). Among them was the 62,000-hectare plot granted to LAJ in 2010. The forested part of this parcel was “de-classified as secondary forest in 2008”, explained Johan Kieft, Secretary General of TLFF and UNEP’s senior specialist on land use and the green economy, to Voxeurop. Kieft thus implicitly confirms that LAJ brought back to Barito 20% of the former IFA area – which was situated in a portion that had until recently been categorised as primary forest. And along with it came the right to clear the land.

This background is noted in the 2010 NGO report mentioned above. It cites a 2005 field study by local NGO KKI Warsi and Bogor Agricultural University, which concluded that the native forests in the former IFA concession, although selectively logged, still retained a volume of wood with a high carbon-storage potential and that it would therefore make more sense to restore them than to convert them to plantations. (4)

“Primary forests that are selectively logged and therefore legally categorised as secondary” – such as those that were permanently cleared by LAJ – “still have the capacity to provide important biodiversity and carbon sinks”, Hansen concurs.

“Degraded forests can recover naturally or through assisted restoration, and eventually return to their primary-forest state,” echoes the FAO Forestry Department.

“Our analyses show that before being allocated to LAJ, the area had dense natural forest with old growth trees, although it was not completely intact and may not have qualified as primary under Indonesian rules,” said Elizabeth Goldberg, head of Global Forest Watch (GFW). She cites an interactive map tracking the loss of primary forests worldwide since 2001, regardless of whether they have been downgraded by national laws.

Locals in the deforested areas confirm what the satellite observations and interactive maps tell us. For example, Sumbasri, a farmer who has lived since 1975 in the village of Pemayungan, which is now located right in front of RLU’s rubber plantations, told Tempo reporters that “before LAJ’s clearing, there was still a forest, although not a very dense one, since the biggest trees had been cut down by IFA before”.

The TFT/Earthworm audit report commissioned by Michelin (see Chapter 2) concluded that clearcutting in the concession had also affected areas of high biodiversity alongside the Bukit Tigapuluh National Park, that should have been protected.

The reliability of the environmental impact assessment approved by the Jakarta government in 2009, which would have allowed Lestari Asri Jaya to destroy valuable but degraded ecosystems, is implicitly questioned even by Michelin’s public affairs director. “We found a valuable forest where [according to LAJ’s logging plan] there should only be bushes to clear. We had to change the plans to protect these places,…