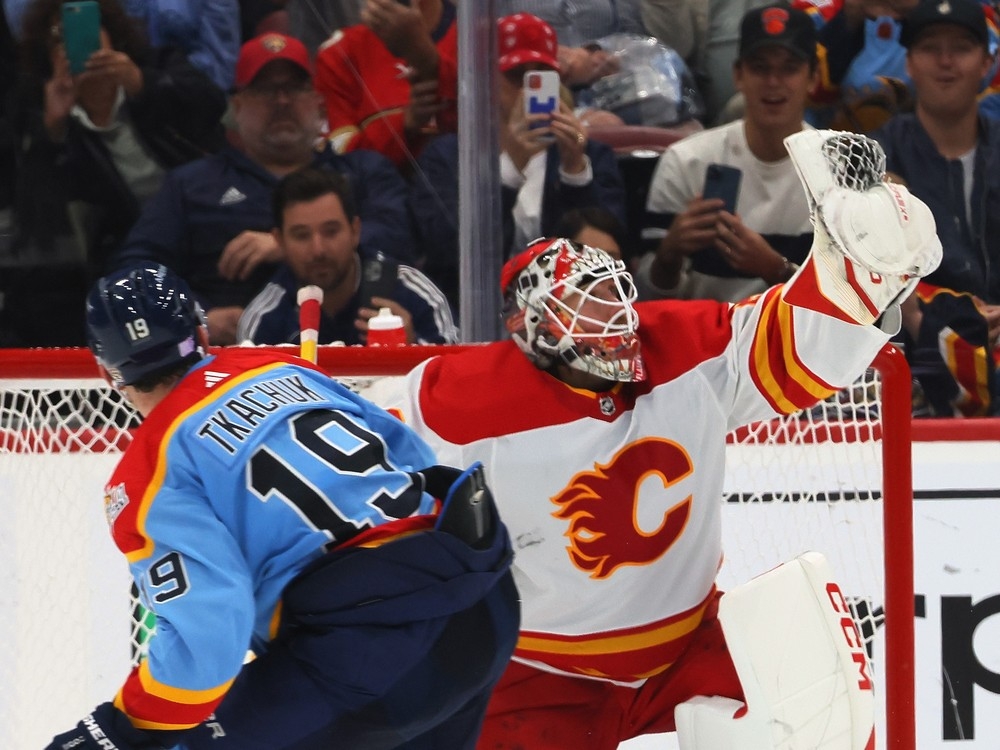 PITTSBURGH — Darryl Sutter was asked earlier this week about being comfortable in those close, could-go-either-way kinda contests.

The Calgary Flames have, after all, played their share of squeakers.

Sutter’s squad has already had 11 games — nearly two-thirds of their schedule so far this season — decided by a single snipe. Across the NHL, only a few other clubs have been involved in that number of nail-biters.

“If you wanna make the playoffs, you better get comfortable being uncomfortable,” Sutter replied.

And you better be comfortable with the guy between the pipes, especially when you need a clutch save shortly before the buzzer.

It hasn’t been a fairy-tale fall for Jacob Markstrom, but the workhorse netminder deserves credit for some timely ’tending of late as the Flames have started to erase the damage done during an extended losing skid.

The Calgary-based crew has now won four of their past five, all scripts that could have come with a cruel twist just before the credits rolled.

Monday’s 5-2 triumph over the Philadelphia Flyers won’t go in the books as another one-goal game, but the reality is we may have been talking overtime or a shootout if not for Markstrom’s denial on Joel Farabee with less than two minutes remaining and his crease counterpart pulled for an extra attacker.

Markstrom was sealing off his right post when Zack MacEwan — jostling with a pair of defenders as he fished for a rebound — swatted the puck into the slot to an unmarked Farabee.

The Flames’ masked man was anticipating that pass, right-on with his read. He quickly pushed across the blue paint, not leaving Farabee much mesh to shoot at from his backhand.

It looked like a routine save. It was not.

Seconds later, Flames forward Blake Coleman fired from his own hashmarks, scoring the first of two empty-netters that would salt this one away.

“He’s our rock, man,” Coleman said of Markstrom. “He’s been great for us. I think we’d all agree that we give up way too many Grade-A chances, so I think we’d like to limit that for him. But to his credit, he’s bailed us out more times than I can remember. He gives us a chance in every game, and he was great again tonight.”

If he was within earshot, Markstrom might have disagreed with that big-picture assessment. Just six months removed from a Vezina Trophy nomination, the stalwart Swede has been his own toughest critic, repeating just the other day in Tampa that he needs to be better. While the 32-year-old was understandably frustrated after allowing a softie in that loss to the Lightning, he has been mostly looking — and feeling — more like his usual self.

“The confidence is up there,” Markstrom told Flames TV after a practice in Pittsburgh, where a six-game road-trip continues with Wednesday’s showdown against a scorching Sidney Crosby and the host Penguins (5 p.m. MT, Sportsnet One/Sportsnet 960 The Fan). “I’ve felt like my game has been right there and close to where I want it to be. Obviously, there are goals that go in that you want back and you want to eliminate those and not give the other team an easy goal. But I think it’s close. It’s getting there.”

Markstrom, who has posted an 8-4-2 record so far, would like to shrink his 3.03 goals-against average. He is currently stuck with an .889 save percentage and knows that number needs to start with a nine.

But while he works to put some early struggles in the rearview, to avoid the occasional groaner, it’s worth nothing that he’s been coming up with big saves in game-breaking moments.

During Saturday’s doozy in Florida, he made a superb snag on Aaron Ekblad in overtime and later sealed an emotional victory by stopping four in a row in the shootout. That included a no-love glove on Matthew Tkachuk, who tried to freeze his old puck-stopping pal with a slapper during the breakaway competition.

And remember, right before the Flames packed their suitcases for this six-game getaway, Markstrom robbed Los Angeles Kings star Anze Kopitar with 20 ticks left on the Saddledome score-clock to preserve a one-goal edge of a Pacific Division rival. He later downplayed that dandy, stressing it wouldn’t have been as thrilling a finish if he hadn’t surrendered a handful in that high-scoring affair. As he put it: “You want to get that down. But when it does happen, you want to make sure that you make timely saves to help your team stay in a game.”

Monday’s calm, cool and crucial stop on Farabee left a reporter thinking about a recent chat with the Flames’ go-to goaltender, the conversation turning to the sort of desperation jobs that end up on the highlight shows. Like, for example, that sprawling save on Kopitar or an old-school pad-stack on Winnipeg‘s Mark Scheifele in the previous outing.

“I like the more controlled ones, when I’m in the right spot and it hits me in the stomach, where I appreciate the movement and everything that leads up to it,” Markstrom said. “Those are the highlights I like. A lot of people are just looking at the shot and the save. But for me, I like to watch when it’s good movement, you’re hitting the post right where you want to hit it and you’re ahead of the game. When you get it in the stomach, most of the times that is more work than sliding over and it hits you.”

Which brings us to Farabee’s backhander, a golden opportunity to drain the tying tally and force overtime.

It landed right on the logo. Followed by Coleman’s empty-netter, it essentially cinched the win.

Markstrom must have liked that.