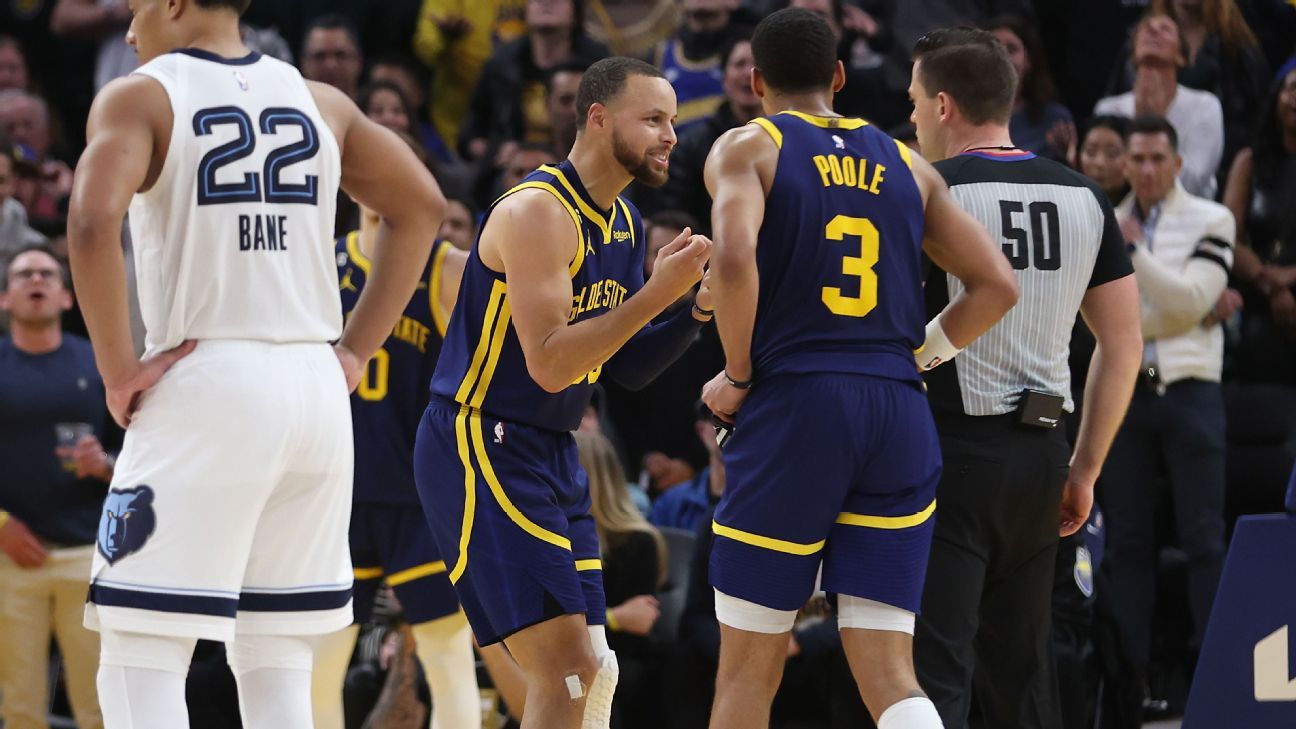 SAN FRANCISCO — With Golden State leading Memphis by just two points with 1:14 remaining Wednesday night, Stephen Curry clapped his hands at Jordan Poole after what Curry thought was an ill-advised 3-point attempt by his Warriors teammate.

While running back on defense, a frustrated Curry took out his mouthpiece and whipped it through the air. It ricocheted off the court and landed near the courtside seats, an automatic ejection.

“It was a crucial time in the game, and the way that our season has gone, questions about a heightened sense of urgency … when you want something really bad … I reacted in a way that put myself out of the game and put the team in a tough place,” Curry said, after the Warriors pulled off a wild 122-120 victory.

This was Curry’s third career ejection, including playoffs. All three ejections have involved his mouthpiece. In Game 6 of the 2016 NBA Finals, Curry was tossed for an almost identical incident, when his mouthpiece flew into a fan sitting courtside. In 2017, he was ejected after throwing his mouthguard at a referee in a game against the Memphis Grizzlies.

Because his mouthpiece didn’t hit anyone Wednesday, Curry didn’t think it should have been an immediate ejection. But crew chief Sean Wright confirmed the reasoning to a pool reporter: “Stephen Curry takes his mouth piece and throws into the stands with force, as per rule, that is an automatic ejection.”

With 4:25 left in the game, Curry cut the Warriors’ deficit to four points with a 26-foot 3-point jumper over Ja Morant. About two minutes later, with 2:18 to play, he tied the game with a long 2-pointer, also over Morant.

The Warriors got a huge stop on the other end, followed by three Curry free throws. One minute later, Curry was ejected.

Even without their star, the Warriors dug deep enough to pull out the win.

“This is a big win for us for a multitude of reasons,” Draymond Green said.

He continued: “I think there is always more focus in this game. I think [the Grizzlies] bring out a different competitive side in us and we do the same for them. Both teams rise up for this game, it’s a fun one to play every time.”

It wasn’t a pretty game, at least for the first half. The Warriors committed 11 fouls and had 14 turnovers in the first half — the most they’ve committed in any half at home this season. Meanwhile, the Grizzlies’ offense was cold, shooting just 41.7% from the floor, including 25% from 3 on 4-of-16 shooting.

But near the end of the second quarter, the tide started to turn for both teams. Along with that came some chippiness. As the teams exited the court for halftime, Curry, Klay Thompson and Poole chirped at Memphis players as they walked toward the tunnel. Then in the third quarter, Green and Brandon Clarke picked up technical fouls.

This was the latest chapter in the Warriors’ budding rivalry with the Grizzlies. Neither team thinks it has reached full rivalry potential quite yet, but given the playoff series last season, it has all the makings of one.

The Grizzlies tied Wednesday’s game with 6.1 seconds left on a dunk by Clarke. On the next play, the Warriors wanted to get the ball to Thompson, who eight seconds earlier had hit a 28-foot 3-pointer. But on this possession, with 6 seconds remaining, he missed the shot. The ball was deflected off the Grizzlies, giving the Warriors possession.

That’s when Green thought of a playcall for Golden State.

“I was just trying to think quick and I was thinking that all of our other out-of-bounds underneath plays we’ve already run,” Green said. “I was trying to think of something that No. 1 they hadn’t seen, but No. 2 that could give us some space.”

Donte DiVincenzo held the ball looking for somewhere to inbound it. First, Thompson pealed to the left behind a Green screen. Next, Anthony Lamb rotated to the left. Meanwhile, Poole cut into the hoop.

DiVincenzo and Poole made eye contact and DiVincenzo passed him the ball. Poole finished with a reverse layup to put the Warriors up two with 2.3 seconds to go. It was the first go-ahead shot of Poole’s career.

“[It was] fire,” Poole said. “It’s the only way to say it. It was pretty dope … if anything, to take a positive from this, we know what to do in these crunch games. We’re getting a lot of experience with close games in the regular season, and that will definitely help us down the road.”

The Warriors have had multiple crunch-time games this season, but they haven’t found success in them. Golden State is 12-13 in such games, which ranks 18th in the NBA. This week, the Warriors have given up second-half double-digit leads three times, losing two of them.

The main reason for this, the Warriors say, has been execution, or lack thereof. But against the Grizzlies — especially after Curry was ejected — the Warriors managed to execute. And most importantly, execute their out-of-bounds play.

“We needed this win in a desperate way,” Curry said. “Not just because it was Memphis and all of the narratives there, but it is just how we are playing … To see the guys bounce back the way that they did and finish the job, there were a lot of celebrations in the tunnel.”