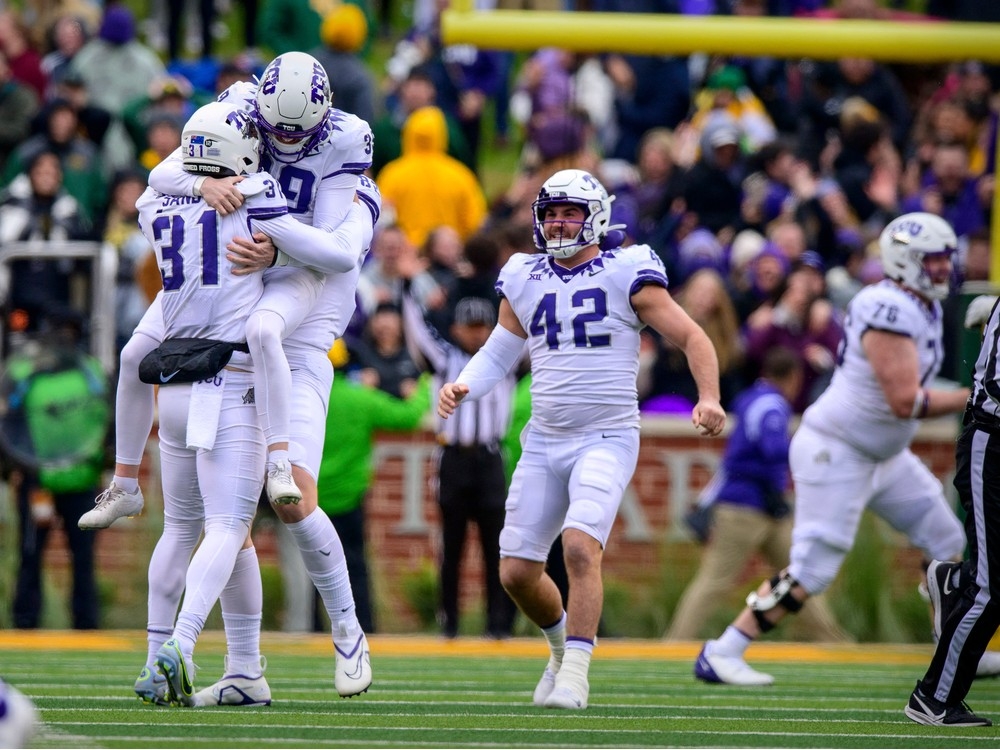 “Unbelievable,” said the colourful head coach of Michigan Wolverines after a day that saw both his third-ranked team and the fourth-ranked TCU Horned Frogs wait until the final seconds to kick home victories and stay unbeaten on the NCAA football season.

With their College Football Playoff hopes on the line, TCU and Michigan hit respective field-goals covering 40 and 35 yards for the winning points in crazy endings of pivotal contests.

Griffin Kell stroked his winner for TCU (11-0) to edge the host Baylor Bears (6-5) in Waco after a scramble to get the ball off in time just barely beat the buzzer. Frogs head coach Sonny Dykes was playing with fire after running the ball on third down with no time-outs left in the final minute. But as they’ve done all season, his charges pulled out a victory from the jaws of defeat.

“Wow … what a ballgame,” Dykes told FOX Sports post-game. “Our guys just never quit. They believe in each other. We were well-prepared. We practised that (last-second-bring-on-the-kicking-unit) play every Thursday, and Griffin just came in and knocked it down. Man, what a win!”

Jake Moody punched his through for Michigan (11-0) leaving just a few clicks left on the clock in a 19-17 escape of the pesky Illinois Fighting Illini (7-4) at the Big House in Ann Arbor, Mich.

“That play looks more frantic than it is,” insisted Dykes. “I promise you.”

The Moody kick capped what had been a battle between the team’s respective No. 2s — running backs Chase Brown and Blake Corum — before Corum went out with a knee injury leaving Michigan without its most potent weapon. The Heisman Trophy hopeful had 108 yards on 18 carries before departing from the game just prior to halftime and makes him doubtful for next week’s massive Big Ten matchup — and final-four factor — with the No. 2 Ohio State Buckeyes. Meanwhile, Brown, from London, Ont., stayed atop the FBS ranks in rushing yards — 1,442 and counting — with a 140-yard effort for the Illini.

But it was Moody the hero on the day with four field-goals, including the capper with nine seconds remaining in regulation.

“He’s an iceman — he’s got ice-water in his veins,” said Harbaugh of his kicker post-game to ESPN. “So does our quarterback J.J. McCarthy (who led Michigan on the eight-play, 35-yard winning drive in the final two minutes). Just so proud of our team.”

Ohio State (11-0) nearly had its unbeaten record snapped in a 43-30 barnburner over host Maryland (6-5) that wasn’t decided until very late. Whenever you’re ready to de-list Ohio State QB C.J. Stroud as a Heisman favourite, let us know. He was pedestrian again in an 18-for-30, 241-yard performance, as the Buckeyes got 146 yards and three TDs on the ground from freshman Dallan Hayden … The other top-four team, No. 1 Georgia (11-0), won a 16-6 tussle with host Kentucky (6-5), which could’ve been a trap game after it had already clinched a spot in the SEC finale … The trap did spring on No. 5 Tennessee (9-2), as its final-four hopes died, when host South Carolina (7-4) shocked Rocky Top. Out of nowhere, QB Spencer Rattler went 30-of-37 for an eye-popping 438 yards and six TDs in the massive upset.