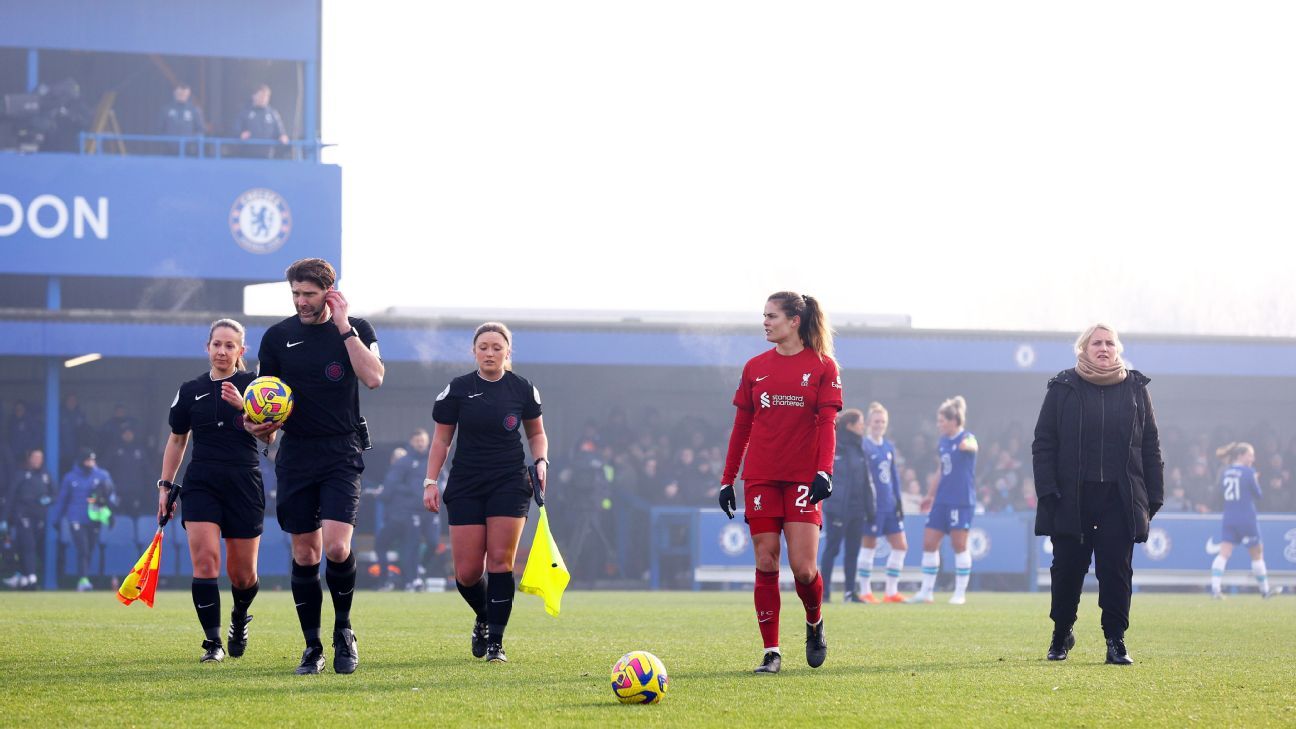 England has been cold this month. This shouldn’t be breaking news for anyone; it is, after all, January in northern Europe. We’re a third of the way through the winter, and most of us have already had our “dog on polished hardwood floors” moments trying to get to the shops, our rubber soles failing to get much purchase on the icy pavement.

Yet for those who tuned in Sunday intending to feast upon Chelsea‘s clash with Liverpool, they would have been surprised to see the players slipping and crashing on the frozen Kingsmeadow pitch. Well, for slightly less than five minutes at least.

After Liverpool winger Shanice van de Sanden had seen her scuffed shot gathered by goalkeeper Zećira Mušović, and Chelsea midfielder Erin Cuthbert was slow to pick herself up after a hard fall while trying to get herself in front of the effort, referee Neil Hair blew his whistle. The match clock read 4:53 when he signalled the two captains over — their conversation did not last long before he walked over to the two coaches and then the match manager.

There was confusion in the commentary box and at Kingsmeadow before the boos began to ring out: game over.

Providing the colour commentary for the BBC, former England and Everton goalkeeper Rachel Brown-Finnis recounted a story from her playing days, and of what seems to be a page from the 2009-10 National League Cup final held in early February in Rochdale: “I remember playing in a league cup final [about] 10 years ago, and it was a TV game and, at that time, there weren’t many TV games. They basically made us play. [The pitch] was sharp, it was rock hard, it was hard to keep your feet — it was dangerous ultimately.”

BBC have denied any influence on the match going ahead, telling The Athletic, “There was no pressure applied by the BBC to get the game played. The safety of the players is always paramount.”

There is a certain coincidence around the fact that both games picked for broadcast Sunday (Brighton vs. Arsenal, slated to kick off at 6:45 p.m. local time, being the other) seemed to have very lengthy pitch inspections whereas Spurs vs. Leicester City (not picked for broadcast) was called off the day before.

Indeed, the pitch inspection at Crawley Town, where Brighton play most of their home games, took so long that the match wasn’t declared postponed until 4:11 p.m. — nearly two hours after the inspection was supposed to have started at 2:30 p.m. Calling the game so late in the day was also an insult: many fans had already started their journeys to the southern ground, including a strong contingent from the Arsenal Women Supporters Club who hunkered down in a pub a half-mile from the ground.

Had the Chelsea-Liverpool game simply been called off following the initial pitch inspection at 9:30 a.m. when it was, according to some sources, deemed unplayable, we would simply be ruing the cold weather and maybe talking about the impact of climate change or floating the idea of under-pitch heating in the WSL. However, watching two teams in the top tier, including the current champions, trying to keep their balance on an ice rink for 293 seconds before the referee stopped the farce, has accelerated the issue of the playing surfaces in the league.

This is, of course, not the first time a clash between the Blues and the Reds has sparked debate about the quality of pitches in the WSL — their clash at Prenton Park in December 2019 went viral thanks to a similar amount of outrage.

That day, the muddy pitch in Birkenhead drew the ire of Chelsea boss Emma Hayes who blasted it as a “stain on the club.” Images of Cuthbert kneeling on a boggy pitch, kit and flesh doused with runny mud, circulated among women’s football fans and players for weeks. This time, it’s a video supercut of players struggling (and failing) to keep their footing on the frozen pitch with Niamh Charles the unlucky highlight, the Chelsea defender unable to scamper back to her feet after sliding onto the unyielding surface.

After the match, Hayes called for under-pitch heating across the league, but there’s nothing to stop Chelsea, who own their Kingsmeadow home, from installing one. (Unless, of course, they’re being blocked by the powers that be.)

Teams like Arsenal and Brighton, who do not own their regular-league homes — Borehamwood and Crawley, respectively — are not as fortunate given that they’re tenants, even if they have the money to spend on such. Indeed, only Chelsea, Leicester City, Manchester City and Reading own their typical home grounds. With the Foxes and Royals using the men’s stadiums for their games, the quality of their pitches is rarely brought into question, but for everyone else, and where non-league grounds have for so long been the norm for women’s teams in England, it is a constant bone of contention.

There is the argument, of course, that if a club can’t afford to install under-pitch heating or, say, pay their players throughout their pregnancies — Sara Björk Gunnarsdóttir’s story has been another difficult lowlight this month — or even fulfil what we have begun to deem as basic requirements, should they have a women’s team in the first place? We know that even among clubs with enough money to bankroll their women’s sides, there’s still a tendency to put in little more than the bare minimum.

A problem seen and felt through the game comes with the accelerated speed of development and growth, not least in England where from the 2018-19 season, all teams in the WSL have been full time. While the men’s game grew organically, crossing bridges and lifting itself over hurdles when it reached them, there is a degree of fast forward about women’s football that sees cart being put before horse. For example, the WSL’s broadcast deal highlights the nation’s appetite for the sport, but with the grounds used by the 12 teams usually being of a lower quality, there is a disconnect, though certainly not the only one, as many clubs fail on the basics like appropriate medical care.

Yet with images of Charles & Co. skidding across the Kingsmeadow pitch like Bambi getting used to his legs fresh in the mind, multiple players — both in WSL and elsewhere — have used social media to state that what happened Sunday wasn’t good enough and that it’s not right for a league that positions itself as one of the best to still see so many games called off because of the elements.

Players safety should always come first. Luckily no one got injured today.

Only way to fix this is to demand undersoil heating or playing our games in men’s stadiums.

FA and clubs, please do better. 🙏🏽

But it’s not that Chelsea vs. Liverpool was called off, even, but rather that it was ever started in the first place. The timeline of events leading up to kickoff is muddled and contradictory, and the pithy statement from the FA that took over three hours to even be delivered furthers the anger and raises the question of just who was trying to force the game to take place.

According to Liverpool manager Matt Beard, he spoke to the referee before kickoff saying he thought the pitch was unplayable — the Reds even had to relocate their prematch warm-up to a different part of the pitch that wasn’t in the shade. Furthermore, Liverpool managing director Russ Fraser even emailed the FA to record the club’s concerns at the possibility of the fixture going ahead.

As the coach said directly to the BBC after the game was suspended, “Whoever made the decision for the game to be on has put players at risk today.”

The @ChelseaFCW v @LiverpoolFCW game should have been called off at 9:30am once the officials deemed the pitch unplayable. When are we going to take player safety and well-being serious in the womens game?

With the clock ticking down to 6:45 p.m., when Brighton were due to kick off against Arsenal, there was a worry we might see similar scenes with a match being forced to take place. It wouldn’t even have been the first time this season that a Brighton home game was played on a questionable sodden playing surface. However, common sense prevailed and the match was postponed.

Not only do the scenes from Kingsmeadow on Sunday as well as Crawley earlier in the season make the league look like a joke, devaluing the product, but they also put players at risk. As Beard said yesterday, the pitch couldn’t “take a stud” in the warm-up, hence the farcical scenes of professional footballers sliding around the solid grass. Luckily, save for a few bruises, no players sustained any injuries Sunday, but that doesn’t excuse them being put at risk in the first place.

Although costly under-soil heating might not be the blanket answer for the league, something needs to be done to ensure players aren’t being forced to take to the pitch in dangerous conditions.