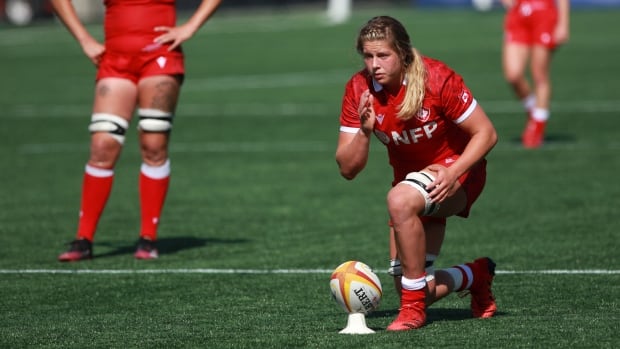 Canadians Sophie de Goede and Emily Tuttosi have been named to World Rugby’s Women’s 15s Dream Team of the Year.

De Goede, who captained Canada to fourth place at the recent Rugby World Cup in New Zealand, was also a finalist for the Women’s 15s Player of the Year award won by New Zealand fly half Ruahei Demant.

De Goede, a powerful No. 8, led the tournament with 101 runs and ranked fifth in tackles with 65. The 23-year-old from Victoria also served as Canada’s placekicker, tying for fourth with nine conversions.

Tuttosi tied for second at the tournament with six tries, five of which came in Canada’s opening two wins over Japan and Italy. As hooker, Tuttosi did most of her damage at the back of Canada’s forceful driving maul.

The Canadian women, the lone amateur side to reach the final four of the World Cup, gave top-ranked England all it could handle before falling 26-19 in the semifinals. Canada, now fourth in the rankings, then lost 36-0 to France in the third-place match.

De Goede, whose parents Hans de Goede and Stephanie White also captained Canada in rugby, said being selected to the world all-star team was “such an incredible honour.”

“To get this award is really a humbling representation of where I’ve personally come from but more so where our team’s come from in order to get to this point,” she added. “Hopefully we just grow from here.”

Said Tuttosi: “This award is truly the cherry on top of an amazing [World Cup] experience.”

The 27-year-old from Souris, Man., plays for the Exeter Chiefs in England.

The World Rugby Awards were held Sunday in Monaco at the Salle des Etoiles.

“I never knew about the Black Ferns growing up as a kid,” Demant said. “I guess like most women my age, women’s rugby was never accessible, was never something that you kind of aspired to be like, because you never had role models like that to look up to.

“And that was one of the great things about this World Cup, it was free to air, so everyone could watch it. But people could turn on the TV or go to the games and see people that look like them and so many strong women out there doing amazing incredible things.”

The 29-year-old van der Flier started all 11 of Ireland’s tests in 2022, including its historic series victory over the All Blacks in New Zealand.

Canada figured in another award but this one went to England wing Abby Dow for women’s try of the year.

The play covered the length of the field after England turned the ball over metres from its own try-line in the World Cup semifinal in Auckland. The ball went wide to wing Claudia MacDonald who sliced through the Canadian defence before feeding Dow who raced 65 metres to cap the free-flowing move.