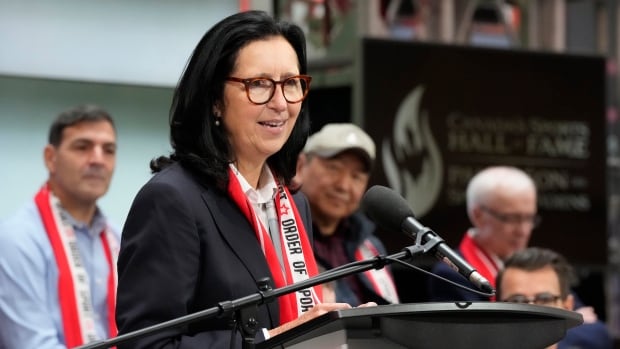 The table is set, there are options on the menu, but the guests aren’t arriving.

Canadian Olympic Committee president Tricia Smith is still imploring B.C. provincial leaders to have a seat with the group working on a bid for the 2030 Olympics and Paralympics, which is led by the Lil̓wat7úl (Líl̓wat), xʷməθkʷəy̓əm (Musqueam), Skwxwú7mesh (Squamish) and səlilwətaɬ (Tsleil-Waututh) nations and also includes the Canadian Paralympic Committee (CPC) and the municipalities of Vancouver and Whistler.

The province announced in late October it wouldn’t support the bid, which was asking for $1.2 billion in government funding. But in an open letter to elected B.C. officials Monday, Smith and CPC counterpart Marc-André Fabien said the sides hadn’t even come together for an in-person meeting prior to the rejection.

Smith told CBC Sports on Tuesday that there is room for negotiation in the bid proposal sent to the province — if only the province would take a seat next to the bid group.

Smith, the 65-year-old four-time Olympian, added that provincial and federal government staffs had been attending bid meetings since January, “but made it very clear that they’re there as observers.”

The open letter came days after NDP leader David Eby was sworn in as B.C. premier, succeeding John Horgan, who stepped down for health reasons.

Smith said that the timing of the letter was intentional. She said the four host nations asked for a meeting with the province three weeks ago.

“We’re really hopeful that we can meet with all levels of government and the stakeholders to really have a full discussion about the bid, the pros and cons, who might take on what,” she said from Lausanne, Switzerland, where she’s set to attend a week’s worth of International Olympic Committee meetings. The 2030 Games are on the agenda.

Lisa Beare, B.C.’s minister of tourism, sport and culture, said in a statement to CBC Sports on Monday the province declined its support “given the significant investment and risks involved.”

Beare said the information was relayed to the bid group in a virtual meeting on Oct. 24, three days before the decision was made public.

“We know that this decision is disappointing for everyone that put so much hard work into the bid, but supporting the proposal any further would require dedicated and substantial provincial resources across government, while there are many competing priorities and challenges to be addressed.

“The cabinet decision is binding.”

CBC Sports reached out to Beare for further comment on Tuesday.

Regardless, Smith is urging the province to give the proposal a closer look.

On The Coast10:27B.C. Government will not be supporting bid to host 2030 Olympic & Paralympic Games

The Líl̓wat, Tsleil-Waututh, Musqueam and Squamish First Nations have been working together with the Canadian Olympic Committee as part of an Indigenous-led bid to host the 2030 Olympics and Paralympics. But today, B.C. Government has announced they will not be supporting the bid. For more, we’re joined by Musqueam First Nation’s Chief Wayne Sparrow.

Reconciliation, sustainability at forefront of bid

Smith reinforced the values within the Indigenous-led bid.

“We know that these Games would also address some commitments made by the federal government in terms of the United Nations Declaration on the Rights of Indigenous People. So it’s really action on reconciliation,” she said.

Another focus of the bid is sustainability. The plan would be to reuse many of the venues from Vancouver 2010, with investment on that front limited to updates as opposed to new builds.

She also emphasized the housing legacy the 2030 plans to leave — a priority in line with the province.

“There’s a lot, a lot of flexibility yet,” Smith said, “which is why we need everyone at the table.”