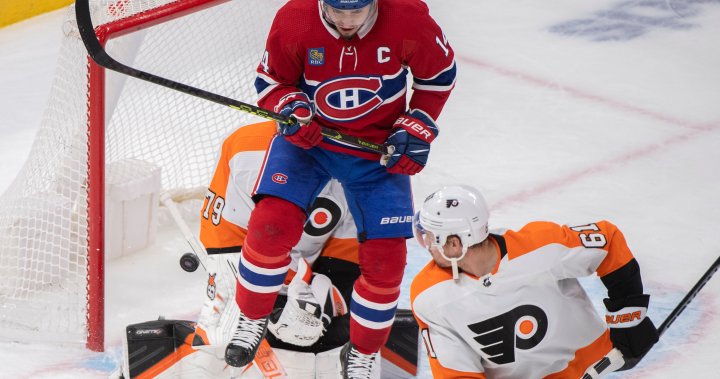 The Montreal Canadiens went into tonight’s game with the Philadelphia Flyers smarting from two of their biggest losses of the season. They redeems themselves, however, handing the Flyers their sixth straight loss in a thrilling 5-4 comeback win.

The Canadiens have been led by one line the entire season. If the club is to build something this season, they need a second line. One may be emerging. Brendan Gallagher and Mike Hoffman on the wings for Christian Dvorak are looking like they’re starting to know where each other is on every play.

Dvorak is an unusual player. He is so phlegmatic as a person, you have to remind yourself that he truly cares. He just doesn’t show a lot of emotion. In Columbus, he made a sublime pass to set up Gallagher for a goal. Tonight, it was Dvorak that finished the play.

He tapped it in when Gallagher was creating all of the havoc in front of the net, but was too tied up to finish it. Hoffman has been scoring goals like he can in the last half dozen as well.

This type of hockey is all fans want this year: an exciting team to watch most nights with promising players doing talented things, while understanding it’s a rebuild. Fans know that there will be losses. They just want to be entertained.

They also want to see young players playing well to create the feeling that the following seasons are full of hope. That means success for the top line who are all young players. Kirby Dach is better than a point-per-game since joining Nick Suzuki and Cole Caufield. Suzuki with another two points is on pace for a 105 point season a quarter into the campaign.

Caufield on the power play from his favourite spot on the left side from 20 feet out scored his 10th goal of the season. With an extra attacker on, Caufield counted his 11th goal after the Canadiens created 55 of the most exciting seconds of hockey in two years.

The final minute pressure was intense: Caufield was firing bullet after bullet. Matheson was brilliantly keeping the puck in at the blue line. Suzuki was threading passes all over the ice. Dach was creating screens. It ended with every fan on their feet when Caufield ripped a shot just inside the post with two seconds left.

Caufield is on pace for a 50 goal season so far. These are exciting numbers for fans who want to believe that the Canadiens will have a first line that entertains them for the next decade.

Earlier, Caufield and Suzuki added to their point totals, assisting on Mike Matheson’s first goal in his first game, a perfectly placed 20-footer to the far corner on Carter Hart.

Matheson was fluid in his skating and confident in his puck-carrying. It was only one game, but Matheson looked outstanding, leading once again to the statement that the new management sure can evaluate talent.

Matheson plus four rookies on the blue line who already look like veterans make it clear that this brand new defensive foundation is looking good. This rebuild is looking good.

That’s eight players with full expectations they will be NHL hockey players. How many of these will land as upper echelon? Even if it is an average number, the club will improve greatly when they arrive.

It also must be mentioned that the Canadiens have two first round picks in perhaps the strongest NHL draft in league history coming this summer. They’ll also be quality players when they arrive.

Even on nights when the scoreline isn’t what was hoped for, every other aspect is falling into place so nicely.

It’s strange these days, because there is just so much going right, it just doesn’t seem feel necessary to pick apart defensive liabilities, or shots that should have been stopped. This feels like minutiae at the moment when the overall plan is being executed effectively.

Yes, Jake Allen hasn’t been all that solid the last couple of games. Yes, one could be picky, but does it make sense to lament a rare poor moment Kaiden Guhle and dramatize it when the rookie is so outstanding in his first NHL games making smart decisions and delivering bone crushing hits?

This rebuild is so impressive and it was such a long wait coming. Stay the course everyone and don’t expect these Wilde Goats segments to be voluminous for a while.

The first game for Mike Matheson ended up creating quite a lot of unnecessary consternation. Jordan Harris was the odd man out to clear the way for Matheson, but Head Coach Martin St. Louis said that there would be a rotation of the young rear guards overall.

Next time it will be Arber Xhekaj and then Jonathan Kovacevic. That is perfectly fine. It’s one thing for Shane Wright to sit five straight times and nine games out of eleven, but it’s quite another thing to be on a rotation to miss a game every three or four.

Add to that, injuries among defenders in the NHL and it won’t be long before this problem of eight able defenders is gone again. The odd game that a rookie misses will not arrest his development.

The key is to make sure that David Savard and Joel Edmundson keep playing. This is vital because considering their contract status and age 32 for Savard and 29 for Edmundson, it’s entirely possible that at the trading deadline they will be dealt.

It would be the wise move. The Canadiens rebuild will come to fruition in three years when both of those players will be on the downswing of their careers. They need not stay around for two seasons of non-vital games.

That means the management team must make sure that they drive up Savard and Edmundson’s value. Both of those players must be on the top two pairs and both must be playing important minutes. Any trading partner must be reminded that Edmundson has won a cup in St. Louis.

It’s difficult to know exactly what is on the mind of Kent Hughes, but it should be continuing to stockpile first-round draft choices for any player that can fetch high value that is pushing 30 years of age. That was the mantra last season.

Veteran contracts can not expire without any return. Letting a player stay to become an unrestricted free agent when a team is not bound for the playoffs is bad management. Good management is to deal them for maximum value. That’s likely this February.

In the case of some of the forward contracts, they will expire without return as, in the present moment, there will not be a market for Jonathan Drouin or Evgenii Dadonov. However, Sean Monahan should fetch a nice return.

Once again, this trading deadline will be massive for the fortunes of the club. So far, it is quite clear that the team is in good hands as Kent Hughes and Jeff Gorton seem to understand exactly what they must do to build a sustainably great team.

For fans, and media, just a little bit of patience is required before everyone is comforted again by the brilliance of this new brain trust.

It’s going to be an entertaining year both on and off the ice culminating in a February to remember.