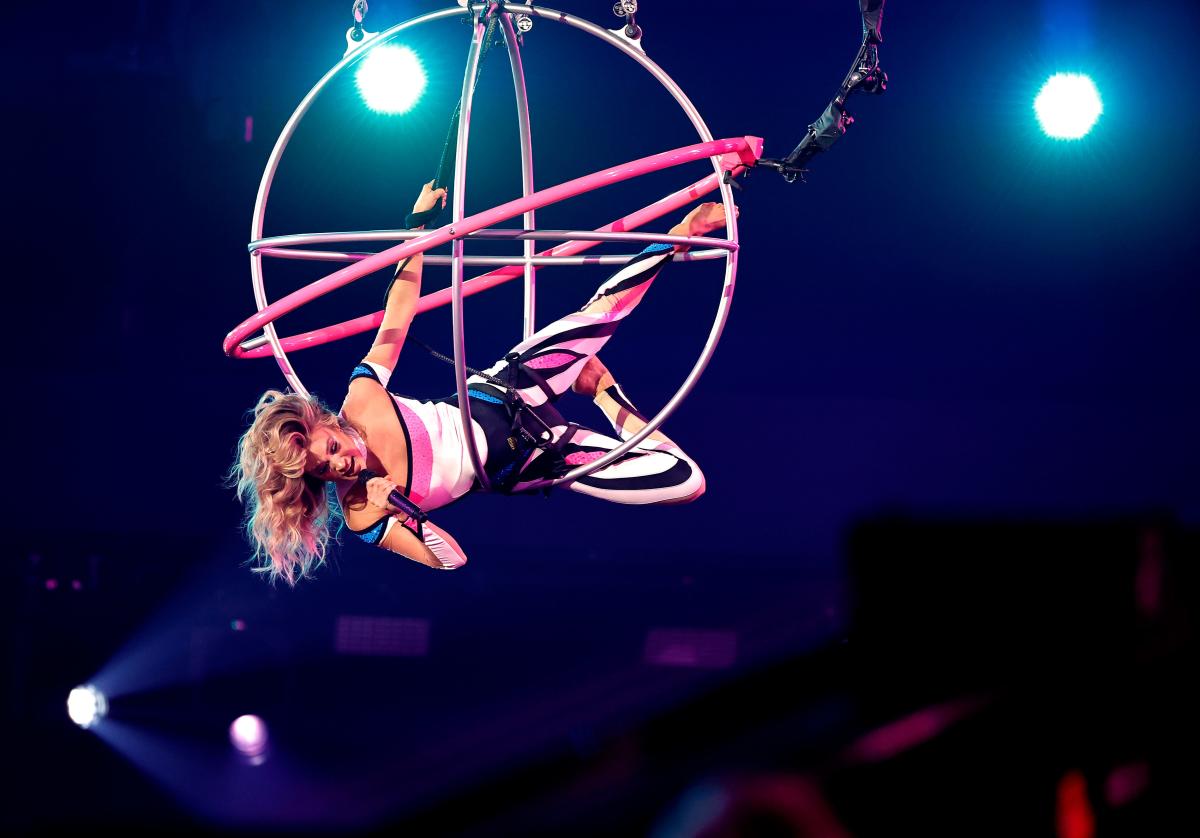 For its 50th anniversary, the American Music Awards are showcasing generations of talent, from first-time nominee and performer GloRilla to timeless icon Stevie Wonder.

Pink is penciled in for a pair of performances – her frothy new single “Never Gonna Not Dance Again” and a tribute to the late Olivia Newton-John.

Debuts are also a major part of the event: David Guetta and Bebe Rexha unveil “I’m Good (Blue)” for the first time on U.S. TV, while Dove Cameron and Anitta take their inaugural performance bows on the AMAs stage.

Here’s a look at how the 2022 AMAs performers fared.

Doing her best Pink tribute, Underwood hung upside down above the crowd in a circular apparatus that zipped her to the stage. Underwood has been going airborne on her current tour, so she looked comfortable dropping to the stage in bare feet and a pink, white and black catsuit as she sang the country-rock number. An enthusiastic fan of Guns N’ Roses, Underwood teased her tresses into hair metal mode and even infused her vigorous performance with some Axl Rose swivel moves.

The sexy Anitta prowled the stage, slinky and seductive as she pumped her pelvis against the floor for “Envolver,” singing in Spanish as two eager male suitors followed her swinging hips. The Brazilian star spun offstage on a luggage cart to allow Missy Elliott to make an always-welcome entrance for “Lobby,” the pair’s hit summer collaboration. In her funky glasses, sparkly suit and silver sneakers, Elliott looked ageless as she glided down one lane of the stage, unfurling her liquid rhymes before meeting Anitta at center stage for a hug and smiles.

Performing her electro-dance collaboration with David Guetta for the first time on American television, Rexha opted for a futuristic motif. Wearing a metallic, bust-baring jumpsuit, Rexha bounced amid a smoky blue stage that pulsed with strobe lights. The pair’s reworking of the 1998 Eiffel 65 hit “Blue (Da Ba Dee)” glistens, and Rexha continued to shimmer as she was raised on a hydraulic platform to belt the song’s final notes high above her circle of dancers clad in hats that looked like a space-age Mickey Mouse.

Choosing Ms. “Get The Party Started” to open the 2022 American Music Awards proved a canny decision. Once you get past the double-negative grammar in Pink’s new song, it’s easy to relish this fizzy pop cocktail. A pre-taped bit showed Pink, in her cotton candy-colored jacket, roller skating outside in darkened Los Angeles before inevitably “arriving” inside the Microsoft Theater to continue the song. Pink’s disco-tastic staging – enhanced with fuchsia and purple neon, a pack of skating dancers and some pops of pyro – painted a colorful backdrop to match the song’s carefree vibe. Relatable as always, Pink showed her humanity by stopping for a couple of seconds to catch her breath.