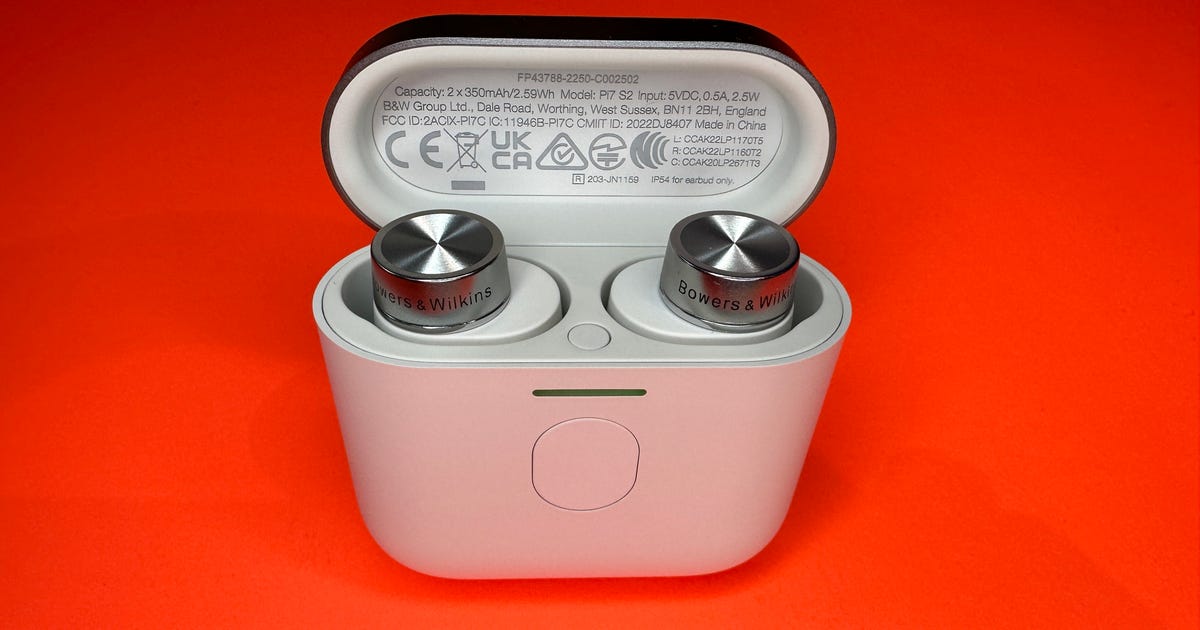 Let’s start with the underwhelming part. For better or worse, although the PI7 and PI5 now come in new color options, their design has barely changed, and they look very similar to their predecessors. If you look closely, the grilles over the microphones appear to be slightly larger, and there’s a sensor just below one of the microphones that wasn’t there previously. Bowers and Wilkins didn’t mention anything about new drivers, so presumably they’re the same, and I’ve confirmed that these new models use the same legacy Qualcomm QCC5126 chipset (with Bluetooth 5.0) as the originals. (The latest 5 series chips are the QCC5141 and QCC5144).

So what’s upgraded? According to Bowers & Wilkins, the new models have better battery life and Bluetooth range, now up to 25 meters, which is double the previous range. Additionally, the buds now integrate into the new Bowers & Wilkins Music app for iOS and Android and have a much improved set-up experience (I can attest to that).

With the original PI7 buds, you only got about four hours of battery life on a single charge with an additional four charges in the case (20 hours total). The battery life on the PI7 S2 is up to five hours for the buds with 16 hours more from the case (21 hours total). Meanwhile, the PI5 goes from 4.5 hours on a single charge to up to five hours but dips from 20 hours additional from the case to 19 hours.

Bowers & Wilkins says the battery life gains in the buds have been achieved through hardware changes, not software updates. The batteries in the buds are new and the antenna design has also changed. “The caps at the end of the earbuds — the sections that carry the logo — have been re-engineered to improve antenna performance,” a Bowers & Wilkins rep informed me. “We’ve introduced a new design of antenna and repositioned it within the earbud endcaps. At the same time, we have switched to use plastic, rather than aluminum to trim each endcap. The result is stronger Bluetooth signal strength, giving us our improved 25-meter range.”

While I certainly appreciate better battery life and improved Bluetooth range with a more reliable wireless connection, the updates struck me as relatively modest. Of course, Bowers and Wilkins could add features later, which we’ve seen before with premium buds that use Qualcomm chipsets (Jabra and Bose, for example). However, Bowers & Wilkins has never updated the firmware of its original buds. So don’t expect these to get multipoint Bluetooth pairing, which allows you to pair the buds with two devices simultaneously — say, a computer and smartphone — and have the audio automatically switch to your smartphone when a call comes in (instead, you have to manually switch between paired devices). Nor can you expect to see support for Qualcomm’s upcoming spatial audio or Bluetooth LE Audio with Auracast capabilities.

The app is also missing an equalizer to tweak your sound. I personally don’t mind a fixed EQ that sticks to a company’s signature sound, but a lot of people like to customize the sound settings of their headphones.

All that said, the touch controls work very well, as does the automatic ear-detection feature. And the PI7 S2’s wireless charging case, like its predecessor, converts into a transceiver, so you can plug the case into the headphone port on an airplane’s inflight entertainment system and wirelessly stream audio from the case to the earbuds. Alternately, you could also connect the case to a laptop audio port and use it to wirelessly stream high-resolution audio to the buds.

Note that the PI5 is very much a step-down model. It’s got a single driver instead of the dual drivers found in the PI7 and one less microphone on each earbud (two instead of three). The aforementioned “wireless audio retransmission” feature in its case is also absent.

All about the sound

Simply put, the PI7 S2 sound great so long as you get a tight seal from one of the three sizes of included ear tips. I’m a fan of Bowers & Wilkins ear tips, which have a similar design to Sennheiser ear tips, and the large tips fit my ears well. These are large ear buds that will stick out of your ears a fair amount, but they did fit my ears comfortably and fairly securely. They offer IPX54 water-resistance, which means they’re splashproof and dust-resistant, so you can run with them, though there are better earbuds options with sport fins that are more suitable for sporting activities (I’m not sure you want to risk a $399 earbud dropping out of your ear). However, I would have no problem using them at the gym.

Like its predecessor, the PI7 supports Qualcomm aptX Adaptive wireless transmission (which includes the aptX HD codec) from compatible mobile devices, allowing for “high-resolution music transmission from suitable streaming services, such as Qobuz.” The list of Android devices — and dedicated music players — that support aptX Adaptive has grown over the last few years and you should ideally pair the buds with a device that supports aptX Adaptive (along with a streaming service that offers high-resolution streaming). That said, the buds also work just fine and sound very good with Apple’s iPhones, which support the AAC codec. (Both the PI5 and PI7 support AAC streaming but the PI5 only supports standard aptX, not aptX Adaptive.) Alas, Sony’s LDAC hi-res audio codec is not supported, but typically headphones support either aptX or LDAC, not both.

I listened to the buds using an iPhone 14 Pro and an Asus ROG 6 Android smartphone that’s powered by Qualcomm’s Snapdragon 8 Plus Gen 1 mobile platform. As I said with the original PI7, the PI7 S2 has exactly what I’m looking for in a good set of headphones: Accurate and articulate sounding with deep, well-defined bass, natural sounding mids, nicely detailed treble and a wide soundstage that gives the overall sound some largesse.

On my iPhone, I tested the buds with Spotify, Apple Music and Qobuz. The PI7 S2 can go toe-to-toe and, in some cases, slightly edge out many of the top mainstream earbuds out there for sound, including Sony’s WF-1000XM4, Apple’s AirPods Pro 2, Bose’s QuietComfort Earbuds 2, Sennheiser Momentum True Wireless 3 and Bang and Olufsen Beoplay EX, which also cost $400.

However, when I switched to the Asus and streamed high-resolution tracks from Qobuz (with aptX Adaptive), I went from saying to myself, “That sounds really good” to “Wow, that sounds awesome.” Bowers & Wilkins has a playlist on Qobuz for its PX8 full-size headphones, so I ran through a bunch of those tracks. Some of them included Taylor Swift’s Vigilante Shit, Athletes of God’s Don’t Wanna Be Normal, Anna B Savage’s Since We Broke up, Orbital’s Dirty Rat and Pixies’ Vault of Heaven. The quality of the bass was a level up — more visceral with added girth and punch — and there was a little more sparkle, depth and nuance to the music all around. I came away feeling my Spotify needed an upgrade.

Good noise canceling but not best-in-class

As with the sound, you’ll need a tight seal to get optimal performance for noise canceling, which can be set to on, off or an “auto” mode that adapts the noise canceling according to the ambient sound in your environment. You can also adjust how much “passthrough” sound you want to let into the buds, which is typically referred to as an awareness or transparency mode.

The buds’ transparency mode isn’t quite as natural sounding as some of the others I’ve used (at the moment, the AirPods Pro 2’s transparency mode is the gold standard). I settled on a midway point for the slider setting in between “min” and “max” for what I felt was the best transparency experience.

The noise canceling is quite effective and does a nice job of reducing a decent amount of ambient sound, particularly in the lower frequencies. However, the Bose QuietComfort Earbuds 2 do a better job reducing noise across a broader range of frequencies (higher frequencies are more challenging for noise-canceling headphones to muffle). So while the PI7’s noise canceling is clearly respectable, it’s not in the same class as the earbuds’ sound.

The PI7’s voice-calling capabilities are at a similar level — very good but not best-in-class. The buds did a nice job of reducing background noise on the streets of New York. While callers said they could hear a bit of background noise, it was reduced considerably, and they said my voice came clearly without any warbling. I could also hear them quite well, and there’s a bit of sidetone so you can hear your voice in the buds as you speak.

Yes, the PI7 S2s are technically a second-gen product, but they feel more like a generation 1.5 product. Bowers & Wilkins has essentially smoothed out some of the rough edges on the original buds (I mean that metaphorically, not literally). The extra hour of battery life and extended Bluetooth range (with seemingly a slightly more reliable wireless connection) are welcome changes. And the setup and integration with the Bowers & Wilkins Music app creates a better overall user experience, despite its somewhat bare-bones quality (compared to Sony’s Headphones app anyway).

If you’re comparing the PI7 S2 to the PI5 S2, which also sound excellent but not quite as good as the PI7, you’ll want to keep an eye on the PI5 S2’s price, which should dip more quickly than the PI7 S2’s price. The original Pi5s are selling for as low as $150, or $100 off their list price of $250, so we’ll see where everything shakes out. The PI5s could end up being the better value, though it’s unfortunate that Bowers & Wilkins added $50 to their list price.

Needless to say, $400 is a lot to spend on a set of earbuds. And when you spend this much, you ideally want the latest technology and features (aptX Lossless, for example). But if great sound is your priority, the PI7 S2s deliver it. And with the buds paired to the right device and streaming service, they can sound downright special.