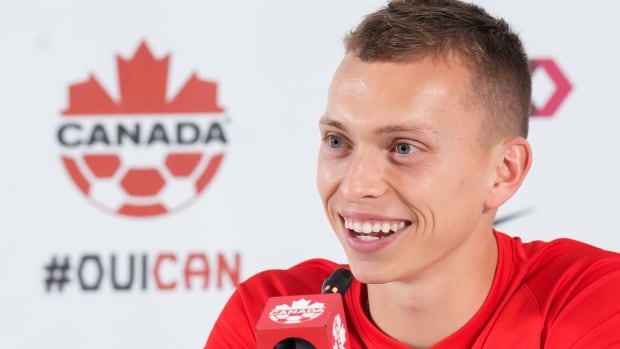 Chris Jones is in Qatar covering the men’s World Cup for CBC Sports.

On a gorgeous evening at the Umm Salal Sport Club north of Doha, the Canadian men stretched out on grass so perfect it was hard to believe it was real. There was laughter that could be heard from a soccer field away, and an easy, languid pace about things.

This is what it looks like when people are having the time of their lives.

At their first World Cup since 1986, their qualification alone was a good soccer story. They’ve since enjoyed rave reviews after their narrow 1-0 loss against second-ranked Belgium in their opening match in Qatar.

“It was such a difficult game,” Roberto Martinez, Belgium’s coach, said after. “Canada were better than us in what we wanted to do.”

Tata Martino, Mexico’s coach, called it the performance of the tournament so far: “Un clinic.”

Host Andi Petrillo is joined for by former Canada Soccer player Jimmy Brennan ahead of the Canadian men’s national team’s upcoming match against Croatia in the World Cup.

Canada surprised many by playing a fearless, attacking game, outshooting the heavily favoured Belgians 22-to-9.

In CONCACAF qualifying, head coach John Herdman sometimes had his team hold back, soaking up pressure before launching quick, decisive counters. (A January win over the U.S. in Hamilton comes immediately to mind.)

Herdman apparently followed his charges’ wishes to put on more of a show. For lesser players on smaller sides, the World Cup is a rare chance to gain notice. Career-changing turns happen every four years.

On Friday, news broke that fullback Alistair Johnston will soon leave CF Montreal for Scottish giants Celtic. According to reports, the two clubs have agreed to transfer terms; only Johnston’s contract needs sorting.

“Just being linked with them, my phone’s been blowing up,” Johnston said Friday, adding that it’s probably time for him to upgrade his iPhone10. “That nearly put my phone out of commission, halfway through a World Cup.”

If the move materializes, the 24-year-old Johnston will join the rarified ranks of Canadians playing in Europe — and, given Celtic’s frequent domestic dominance, also in the Champions League. The dream he is presently living will continue uninterrupted.

Johnston’s rise has been meteoric and well-earned. He was playing in League 1 Ontario as recently as 2019. After only three years in Major League Soccer, he now looks set to move to the Scottish Premiership. It isn’t one of Europe’s top leagues, but it’s still a big step up, and exactly the kind of test Herdman has publicly wished for his players to take.

Scott Arfield, another Canadian, plays for Rangers, Celtic’s cross-town rival in Glasgow. Derbies between them, known as the Old Firm, are unbelievably intense. Supporters are divided not only at the stadiums, where they sit in designated sections divided by columns of empty seats and rows of police, but even on their journeys to them. They take separate trains.

Johnston, perhaps mindful of his ongoing audition — he began turning heads with the national team last November in Edmonton, when he played out of his mind during pivotal wins over Costa Rica and Mexico — was one of the players who most encouraged Herdman to press the Belgians.

“We decided as a group… we said, ‘We want to be a team that comes here to excite. We want to play fearless football,'” Johnston said. “I think we proved that against Belgium. We kind of shocked the world.”

Style points aside, however, a loss is a loss. With only two games of group-stage play remaining, Canada will almost certainly need a win over Croatia on Sunday to keep their hopes of a Round-of-16 appearance alive.

Herdman caused a semi-tempest by telling his players during an impassioned speech on the field immediately after the Belgium game that their job, now, is to, “Eff Croatia.”

Croatian media have pushed back, calling the comments disrespectful. A Croatian tabloid even lampooned Herdman on its cover on Friday, questioning the size of his manhood relative to his mouth.

“We don’t mind if it gets built up in the media, a little bit of tabloid fever,” Johnston said. “I think that’s kind of exciting for us. We know it’s a massive game… But we believe in ourselves, and we believe we can back it up.”

Herdman, asked on Thursday if he would apologize, instead offered more of an explanation. “In that moment, you’ve taken your team to that next place,” he said.

For Johnston, that next place will be Glasgow. Some of his teammates might soon join him on his European ascent. Herdman, too, will no doubt be fielding offers to coach another country or a professional club.

“But right now, the focus is just solely on the national team,” Johnston said.

For the Canadians, a loss against Croatia would likely mean their last game against Morocco will be a pride-only exercise.

A win might mean a ticket to the world.