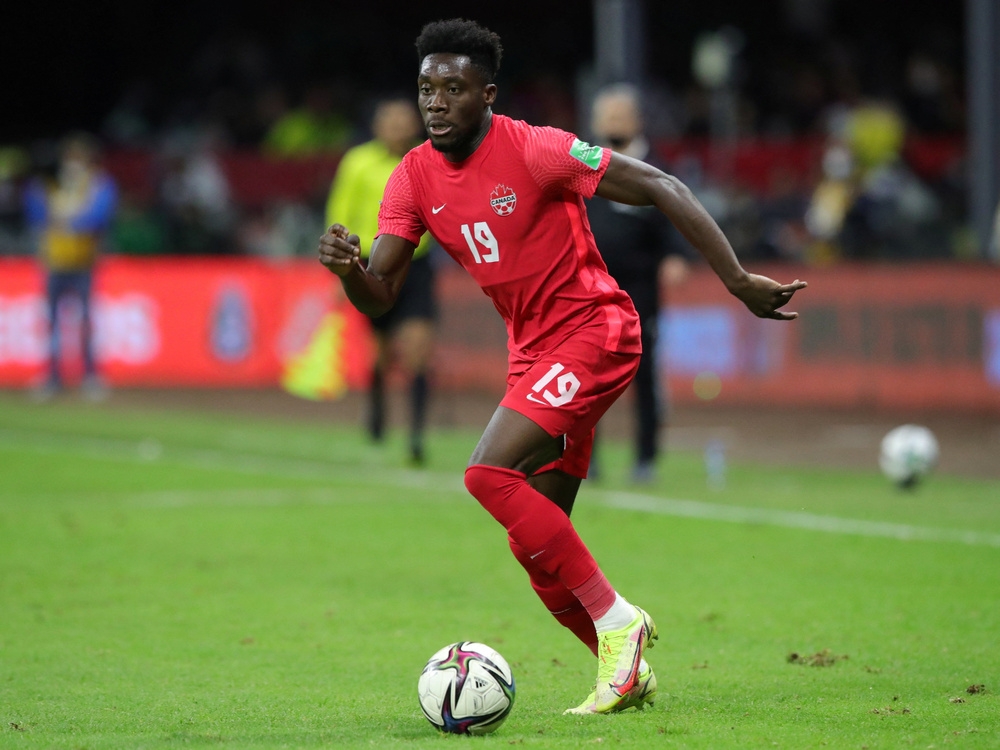 DOAH, Qatar — Alphonso Davies was back at practice with Canada on Saturday, but may not be ready to go for its first game at the 2022 FIFA World Cup.

Davies did some light stretching and passing on his own in the short time media were allowed to take in the practice session at the team’s training facility at the Umm Salil SC complex.

Canada’s star winger is recovering from a hamstring injury sustained two weeks ago in a German Bundesliga game with Bayern Munich against Hertha Berlin. He stayed in Germany for a few extra days to get treatment on the injury while Canada travelled across the Persian Gulf to beat Japan 2-1 in an exhibition game on Thursday.

“It was lovely getting him back in, he always brings a special type of energy,” said Canada head coach John Herdman on Saturday. “It’s great to reconnect for the players, it’s been a while since they’ve seen him. He’s missed some of the journey, and he was gutted to miss that Japan experience.

“But he’s in good spirits, from what I can see, and being in a positive mental state really helps in the recovery process and he’s really excited. It helps when you see an 80-foot poster of yourself when you’re driving into your hotel.”

Many of the skyscrapers here downtown are adorned with massive pictures of the star players participating in this World Cup. Canada has not competed in the tournament since a brief appearance in 1986, where they lost all three group games and didn’t score a goal.

Canada open the tournament Wednesday against Belgium at the Ahmad bin Al-Stadium up the road from here in the Al Rayyan suburb.

Davies sat out the last two games with Bayern before the league’s winter break and is still questionable to play against Belgium. Herdman may elect to save his star player for crucial matches against Croatia next Sunday, and the third group game against Morocco on Dec. 1. The top two teams from the group move on to the next round.

“Is he ready to play? We’ll just continue his assessment,” Herdman said. “He was able to join in some of the contact work, but he is still building towards getting to his top speed. He’s not at top speed yet and when you have hamstring injuries, that’s always the key moment; it’s when hamstring are pushed to that limit.

“Again, we’re just gradually getting to that process with him and we’ll have the next day or two.”

Canada is accustomed to playing without Davies, who missed seven of the team’s 20 Concacaf qualifying games to get to Qatar. The Edmonton product has had a string of injuries over the past year, which began when he developed myocarditis after a bout with COVID-19 last Christmas.

Davies missed Canada’s qualifying matches in March, including the clincher for Qatar against Jamaica at BMO Field. Davies did not get back on the field until April, towards the end of the Bundesliga season.

In early October, Davies sustained a cranial bruise when kicked in the head by midfielder Jude Bellingham in a game against Borussia Dortmund. He was out of the lineup until coming on a second-half substitute on Nov. 1 in a UEFA Champions League match against Inter Milan of Italy.

Four days later, he sustained the hamstring injury in his left leg, pulling up in a race for the ball 20 minutes into the second half of a 3-2 win against Hertha Berlin.

“The big thing for us, is that we’ve been in good form when Alphonso has been out of the team,” Herdman said. “So, it’s not something that I’m losing sleep on; I just trust that these group of guys will get it together in ways they have to, to do what’s required.

“I think as a coach, you’re always rolling the dice. If you push him too early, a player with his sort of talent, it’s always a high-risk situation, he’s so explosive. We’ve got to get this one right, because it could be a long tournament for Canada and the last thing I want is for him to miss this.”

Herdman has to weigh the potential of Davies re-injuring the hamstring if he plays against Belgium or giving it more time to heal.

Canada is not expected to get a result against one of the best teams in the world in Belgium, who are considered title contenders even if they lost 2-1 to Egypt in an exhibition game Friday.

“My mission is to make sure he plays at this World Cup,” Herdman said. “It’s a childhood dream for him and I’m not putting him in a position where he’s unsafe. He trusts his teammates, I trust that we can get through, but I’ll have to say Belgium is at another level. We haven’t faced a team at that level for 10 years since we played against Brazil.

“So, we need players like Alphonso, whether that is starting or off the bench. Given everything that’s happened, we are at a point I have to go, ‘there are other games coming’, Croatia and Morocco and we have to manage it.”

Eustaquio is recovering from an undisclosed issue, while Borjan is dealing with an abdominal issue.

Canada came to Qatar without backup goaltender Maxime Crepeau, who broke his leg in the MLS Final on Oct. 5, along with defenders Scott Kennedy and Doneil Henry.

Kennedy sustained a shoulder injury in a German second division game, while Henry was injured in the warmup of an exhibition game against Bahrain last week. Henry is still with the team, although officially not on the 26-player roster.

“Stephen is day-by-day, it’s another calculation, it’s an algorithm of whether he’s hitting his mark,” Herdman said. “It really is mathematics and what he can tolerate through these next few training days to show that he’s ready to start.”